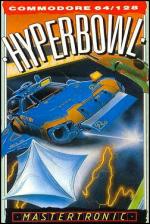 Although the name makes it sound like Odin's Hypa Ball, Mastertronic's futuristic sports game is actually closer to Argus Press Software's Xeno and the ancient game of shove ha'penny.

Hyper Bowl is the latest craze to sweep The Empire which features in the game. It is played on an energy-bounded playing field and the object of the game is to control the ship you pilot and steer the ball into your opponent's goal by ramming it or directing it with your laser.

There are ten different ships you can choose to pilot, each offering a different combination of speed, acceleration, friction rating - how much the field slows you down - ease of control and laser homing devices useful in controlling the ball.

You win if you score more points than your opponent within the five minute match or score a nine point 'killing'. Perhaps after a few games you may be ready to progress to the expert or ace league and have a chance to become the Hyper Bowl champion.

There are ten different ships you can choose to pilot, each offering a different combination of speed, acceleration, friction rating.