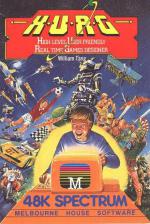 HURG is not a game but a games designer. Melbourne House claims it is the most powerful game design program ever presented on any microcomputer. That may be so, and it may not. It is certainly a competent program to help you design arcade games but it necessarily limits the scope you have. You will not be able to create a new version of Manic Miner or Atic Atac. You will not even be able to emulate the Melbourne House Penetrator. You will, however, after many hours of practice, be able to create your own version of Donkey Kong or Galaxians without too much difficulty.

HURG cover There are several impressive features to the program. First, it is menu-driven, like the Quicksilva Games Designer. On loading, you are presented with a series of choices on the screen. Choosing 'Play Game' allows you to test whatever game on which you are working. Choosing 'Edit Game' will take you to a new menu with more choices, like writing a title page or specifying conditions for proceeding to a new stage of the game - e.g., when all the space invaders are destroyed.

The most striking feature of the program is that it can be controlled almost exclusively by a joystick. All you have to do is use a Kempston and shift the cursor round the screen until you find the option you want. Then you hit the fire button and the choice is made. It sounds simple, doesn't it? It is - and it is not.

There is a fundamental problem with such a program. That is not the fault of Melbourne House, which has produced as good an arcade game designer as any on the market. The problem is that such a program can be only an idiot slave.

If you do not have a clear, detailed concept of the game you want to create you will have an unplayable mess. Good games do not depend on good programming but in the first instance on good ideas. At some stage or other we all buy a turkey. It may have wonderful graphics, be very fast and all the rest of it, but if the idea is not good, the program cannot save it. A turkey may have beautiful plumage but it remains a turkey.

What HURG can do is eliminate much of the tedium of programming - it still takes a long time to create a game but nowhere as long as it would starting from scratch - but what it will never do by itself is give you the originality and inspiration of top games designers.

If you want to get to grips with the problems facing designers, HURG will help you by removing the drudgery from programming.

You may even make money. Melbourne House is offering cash prizes for the best games created with HURG but if you want a game up and running in two hours, forget it. HURG is good but as yet there is no commercial substitute for inspiration.

The program is fully-documented with a 36-page booklet and three example games showing some of the features of the program.

H.U.R.G. is good but as yet there is no commercial substitute for inspiration.