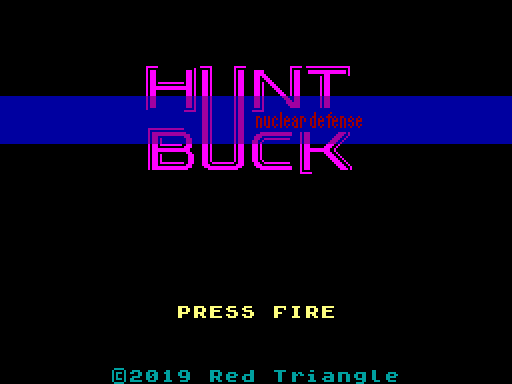 Go out strollin' in this plodding Russian film noire game. 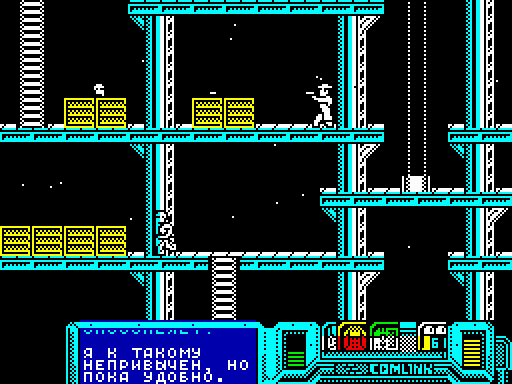 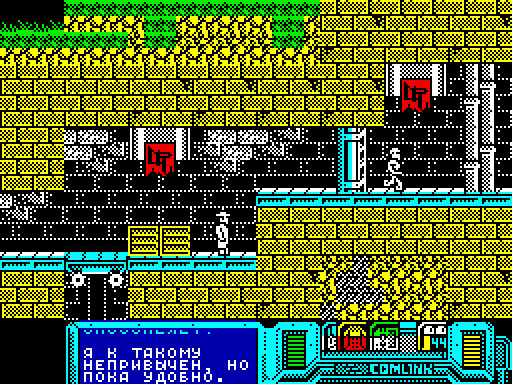 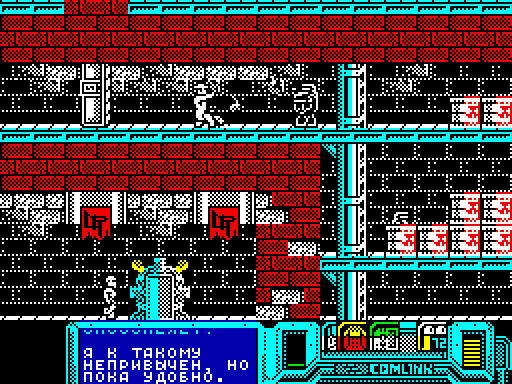 Hunt Buck is a detective, and his game is a platformer in the style of one of the old Ocean movie licences. Batman: The Movie and The Untouchables both had initial levels where the hero was situated in a warehouse and had to tip-toe around it blasting the patrolling bad guys. Hunt Buck takes this idea and runs with it. It's one extremely big, scrolling, warehouse-style environment and the aim is to 'communicate with other characters, collect items, solve logic problems and shoot at aggressive locals'.

Um, right, that explains everything. Not.

Hunt Buck was one of the entrants to the Spectrum's annual Yandex Retro Games Battle 2020, and ranked pretty highly. The game is in the Russian language, which probably means a lot of English Speccy fans won't bother to look at it until it gets patched into English, and frankly they won't be missing a masterpiece. It's perfectly playable without knowing a word of Russian and the fact that the only keys are QAOP and SPACE gives the lie to the 'communicate with other characters' puff. There's no communication with them at all. There just a panel at the bottom of the screen that occasionally says things. Like football commentary. You don't need to be able to read or understand it.

The game has a sort of intense feel to it. Hunt Buck the man seems like the type of demonic cop/serial killer that you might find stalking an Eighties movie, the type of guy that manages to catch up to his victim even when the victim is running for his life and ol' Bucky is just strolling after him menacingly. He doesn't do anything fast, including firing his gun. Curiously, you fire by pushing up: Buck then takes the gun out of his pocket, loads it then aims ahead and fires.

Moving around is a similarly leisurely affair. The screen neatly scrolls, keeping Buck roughly in the centre. There are the usual mixture of elements that you might expect from a platform-based graphic adventure of this type, but it all takes place in almost complete silence, and at a speed that is too slow to get any adrenaline pumping. I think that's intentional. The game has a sort of film noire atmosphere to it, and it allows you to take your time. The nasties which patrol back and forth need to be hit more than once to die, and so you must wait for them to walk away from you, take out your gun, aim it, fire once, retreat, and then repeat. This will guarantee you success against all of them, but it's a tedious gameplay mechanic, to say the least.

I played the game through to the end and it does have some nice elements, Indiana Jones-style carts to jump being one of them, but no real surprises. And the ending, if you get to it, delivers no satisfaction whatsoever.

What Huck Buck needs, seriously, is a good injection of speed. It was never going to be a triple A title, I suppose, but a turbo boost would probably make it a reasonable budget game. As it is though, well, I just don't think its brooding intensity is going to appeal to most gamers. Stick with Batman.