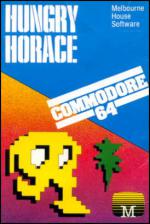 Horace is one of the stars of computer games. Like Miner Willy, Cuthbert and the Pi-Man, his latest games are looked forward to in the same way as the next instalment of the Star Wars or Rocky sagas.

Of course, it's all just a marketing exercise and the fact that these characters appear in a game should not be taken as a guarantee that the game is worth buying.

It's more sensible to judge each game on its merits. Some of the Horace games are good and some are not so good.

My personal favourite was Horace Goes Skiing. This was a considerable success when it appeared on the Spectrum last year, and it now looks set to do well on the C64.

The reason for its success is because the game incorporates two separate, but equally entertaining play elements.

It starts off with a Frogger-type screen in which you have to get Horace across a busy road to pick up his skis from a hut. Cross back again avoiding the fast-moving traffic to the start of the ski slope.

You can now begin your descent. Skiing through the flags, you will be awarded a bonus when you get to the finish for your speed and the number of flags left standing at the end.

At £6.95 this offers C64 owners a good Frogger game and ski simulation rolled into one game.

Just a couple of gripes, though. The game does not appear to work with a joystick as stated, and could we please have a new Horace game instead of more conversions of existing Spectrum titles? Yours sincerely, A Fan.