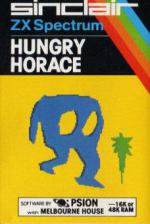 In Hungry Horace, the first of our blue friend's adventures, Horace wants nothing more than a little food to see him through his stroll in what seems to be a rather large park.

Unfortunately, there are few concession stands and food outlets in the park - most people seem content to bring their own lunches.

Horace has absent-mindedly forgotten to make one of his own. So he decides to steal other people's lunches. It's your job to help him.

Horace's efforts to cadge cuisine are opposed by the park's guards who pursue him from the moment the game starts. His only defence is to ring the park alarm bells that send the guards scurrying in every direction looking for the cause of the trouble.

In Horace Goes Skiing, our intrepid hero wants merely to make his way across the road to rent skis and then move on to the slopes. He wants to show off his schussing to all the young Horacettes sunning themselves in the cool video slopes of Mount Spectrum.

In Horace And The Spiders, Horace laughs in the face of adversity as he survives - we hope! - the dangers of bridge and mountain to battle a pack of deadly spiders.

For Horace novices, we will personally tackle our friend's first adventure: his food-snatching farce in Hungry Horace.

Very carefully. There are a few dead ends in Hungry Horace mazes. You will find Horace trapped and ready for easy capture by the park's guards if you lead him into one of those dead ends.

You must make sure Horace is never farther away from an alarm bell or exit than the guard chasing him. Make sure also that you don't get mixed up as to which button is moving Horace to which place. In moments of panic you may be likely to send poor old Horace into the waiting arms of a park guard. The best advice is simple observation. You will soon find that some patterns work better than others in moving you through various mazes.

A Spectrum classic. It's a pretty safe bet that the spiders will regret the day they met Horace and we will soon see the lovable blue blob's next episode.

A Spectrum classic. It's a pretty safe bet that the spiders will regret the day they met Horace and we will soon see the lovable blue blob's next episode.