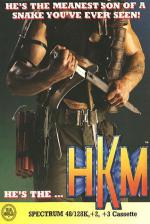 And to think how overjoyed I was when I discovered I'd won a round-the-world trip on Trick Or Treat. The trip of a lifetime which has turned into a nightmare...

First stop was the beautiful city of Moscow. There I was, admiring the Kremlin when a huge, Russian soldier hit me with his rifle. Well I wasn't going to stand for that, was I? So I swiftly kicked him in the Gulags and finished him off with a flying chop - my black beet in karate sometimes comes in useful!

I swiftly moved on to Red Square where I was just eating my pickled cabbage butties when my peace was disturbed yet again, this time by a vicious mutt. His dog tag told me his name was Shepski, but John Noakeski was nowhere to be seen. Anyway, I thought I'd better give the dog some Barbara Woodhouse-style training. So I kicked and punched him until he responded to my 'down' command - permanently.

After being deported, I arrived in Amsterdam. Looking for a bit of culture, I ventured into the famous red light district. Here, I met a gorgeous young female by the name of Maria. This is more like it, I thought. But alas she was into sadism, jumping around, trying to kick the living daylights out of me.

My troubles still weren't over after I'd seen off her advances. Blubberguts Helga decided to have her wicked way with me, but I managed to escape to Barcelona. I was relaxing at a local bullfight when, you guessed it, Miguel the Toreador, took a disliking to me. Worse still, his prize bull Brutus charged at me- he obviously liked my red shirt.

By contrast, Germany seemed a tranquil place, until beer-swilling Hans and Franz the glass-throwing waiter spoiled everything. And what better place to go for a quiet time than the peaceful city of Beirut?! A fanatic Arab and another huge hulk weren't taking any prisoners (or hostages).

So would I advise you to take such an exhausting trip? Well, the scenery's really beautiful and the large characters are well drawn and animated. But beating seven bells out of the natives does become a mite tiresome and repetitive. Judith Chalmers never has these problems. Wish you were here? Well, it's a fair old beat-'em-up but nothing spectacularly new.

'Wow! What can I say? I never normally play computer games, but in US Gold's case I ALWAYS make an exception. They continually seem to produce such technically well programmed and SUPERBLY MARKETED products, its a surprise they haven't taken over the whole software industry. HKM (as we call it in the trade) is one of those products that jumps out of the screen at you, kicks you to the ground and says, 'Play this, or I'll smash your face in!'- it's just so good. As the screenshots show, the graphics speak for themselves - in fact with backgrounds this lifelike I'm amazed you're not required to show your passport when purchasing it. Forget Roger the Renegade and Bob the Barbarian; Kwon is THE lean, mean fighting machine. Go out and buy Human Killing Machine now! Iwon't regret it! PS: Don't forget Thunder Blade, LED Storm, Last Duel ... (that's enough - Ed.)'

This is one of those products that jumps out of the screen at you, kicks you to the ground and says, "Play this, or I'll smash your face in!" - it's just so good.