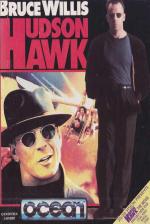 He runs. He jumps. He climbs across rooftops on a rope. He throws tennis balls for some unknown reason. He is Hudson Hawk, the world's most bestest cat burglar and, once this particular game is up and running, he is you. And you are him. And vice versa with cherries on top.

Hudson Hawk is a platform game of three levels, each consisting of a number of little sub-levels. It is based, very loosely, on the critically-condemned film of the same name. You play Huddy, and a gang of nasty people are forcing you to nick three of Leonardo da Vinci's finest works for them. The rotters.

Of course they aren't your run-of-the-mill art collectors out to expand their collection, and said items do in fact have bits of crystal hidden inside them. Once reassembled, this crystal will enable the villains to rule the world. Or something.

Each level involves trying to nick one of these objets d'art (arty objects); a ceramic horse from Rutherford's Auction House in Los Angeles (or possibly New York, what's the difference?); a sketch book from the Vatican (that big church where the Pope lives); and finally a mirrored crystal from Da Vinci's castle in Budapest or Bucharest or somewhere.

Oops. In between the Vatican bit and the Castle bit the baddies have got the other bit of crystal (from a model of a helicopter in the Louvre) themselves. So ignore that bit we said earlier about you having to get the three bits. The third level is the big end-of-film climax where you fight the baddies and try to stop them getting their evil way.

What's really brill about Hudson Hawk is the number of different sub-levels involved. Each stage is fairly short, but presents its own series of logic problems, well-timed movements, and general dicing with death. There isn't really much genuine platforming to be had - most of the stages don't involve an awful lot of climbing - but it certainly knocks mindless beat-em-ups into a cocked hat.

Huddy himself moves like he's on roller skates (which as far as we know, he isn't) and uses tennis balls to take out the fiendish foes that cross his path. These include blackbirds with diarrhoea and parachuting nuns (wacky).

The ventilation shaft bits (which, it has to be said, would be more at home in a Die Hard game) are probably the best. Kind of like Switchblade without the blokes with knives. The other sections are sufficiently varied and challenging to make this one heck of a fab game.

The first level involves you facing up against security guards and laser defence systems as you creep through the art gallery. The second sees nuns as the main opponents. Ho, ho, ho. you might say to yourself, I've seen The Sound of Music, these nuns are nothing but guitar-strumming sissies. Whoops. These nuns have got guns and bombs and stuff!

The final level involves rodents of both the animal and human kind. To wit. rats and gangsters. Apart from that, er, ask us again in a week. [You haven't got off level two then? - Ed] No I haven't. [Ho ho - Ed] But neither have you. [Shut up - Ed] Ho ho.

Hudson Hawk is actually quite easy to progress in, largely due to the sub-levels being so short, the number of lives so large (five), and the fact that many of the traps won't catch you out twice. Unless you're really stupid [Didn't you get caught out loads of times, Ad? - Ed]. You'll finish this game eventually, but not before you've had more fun than a mosquito on a nudist beach.

That jerky scroll is enough to give you a migraine, especially when everything is so, er... blue! It's a great platform arcade game, though, and there's tons to do.

Get to the Vatican roof.

Staying Power 96%
P. Hudson Hawk is a fun game with a lot of depth.

Overall 94%
Hudson Hawk is one of the best platform games we've seen, and great entertainment by anyone's standards.

One of the best platform games we've seen, and great entertainment by anyone's standards.