﻿ How to Be A Hero (Mastertronic) Review | ZX Computing - Everygamegoing 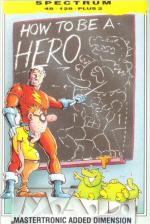 Character building software from Mastertronic's M.A.D. label, How To Be A Hero is actually three games of the wander-around-collect-the-object variety, collected onto one tape.

The idea behind the games is that in each game you can opt for the easy solution, which is to head straight for the maze exit, or you can do it the hard way and attempt to collect the 24 items of treasure hidden in each maze. You don't need to be much of a hero to realise that the treasure is going to be guarded by monsters who wil attack and drain off your life energy (illustrated with wacky computer buff humour by two pineapples at the side of the screen). So, scattered around the mazes are additional food supplies to keep you going, as well as the keys that you'll need to get through the locked doors.

The three games are all very similar, and only the differences in layout of each maze separates one game from another. They all present you with the same sort of overhead view and chunky block graphic, only the minor details vary. In one game you're an explorer in an egyptian tomb, or a space station or a ruined city, and you're always looking for 24 bits of treasure.

They're all passable budget games, and I suppose that getting three of them on one tape is quite good value. Fortunately I'm already such a hero that I don't need to learn how to be one so I shall not be rushing out to buy this.

A suite of three games, all very similar... Only the differences in the layout of each maze separates one game from another.