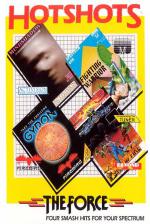 The half is Mindshadow, an illustrated adventure of some sophistication that hasn't been well converted from the C64 to the Spectrum. The graphics look a bit simple and nobody has bothered to change the character set. The end result looks a bit tawdry although the actual plot and gameplay are rather good. It begins with you not knowing who you are and where you have to go, and get's even more confusing. Pure adventurers who couldn't care less about the presentation may love it.

Fighting Warrior was released on the Spectrum shortly after Exploding Fist smashed its way into the Commodore charts, and it suffered because everyone hoped it was to be the Spectrum Fist equivalent (since it was also about bashing people over the head). It wasn't but it's good nonetheless. The idea is to make your way across the desert to rescue the usual imprisoned princess. The problem is that dozens of beings, some of them not entirely human, wish to prevent you. The answer is combat with what appear to be large sticks, using a series of body moves to get your point of view across. The Spectrum emits a surprisingly convincing splat as your stick hits home on the head, body, wing or claws of the enemy. Violent fun for all the family.

Shadowfire was one of the first icon-controlled games. Another one of those complex mixes of strategy game-play and good graphics Beyond seems to excel at. You control, via icon instructions, a team sent to rescue Ambassador Kryxix from the clutches of General Zoff. The screen gives you visual information on what member of the team is where, what sort of baddies are around, status etc. You use the various skills of the team to best effect to find your way to where Kryxix is located. Very highly detailed graphics and a potential playing time of weeks distinguish the game.

Finally Gyron. What to say of this? It's the sort of game mathematics professors heavily into science fiction would invent. Funny really since it was invented by mathematics professors. Visually it is stunningly original with a 3D view of a maze. Sections of the maze are guarded by giant towers, and through other sections giant orbs slowly move. Winning is not a matter of merely blasting but of calculating the complex principles governing both the movements of the orbs and the positioning of the towers for, whilst the towers can be removed by hitting them on their blind spot this may only cause another to be generated in a different place. Perhaps a crucial pathway that leads to the exit... think before you do anything, but not for too long. The wizzo graphics help to disguise the fact that Gyron is one of the most complicated games to win ever. If your brain is up to it, you'll love it.

The wizzo graphics help to disguise the fact that Gyron is one of the most complicated games to win ever. If your brain is up to it, you'll love it.
Logout