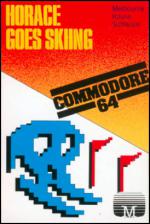 He's certainly getting around, this Horace character. First time around he was feeding his face in a maze. Now he's off to the Alps for a spot of skiing. Where are we going to see him next? Wallaby hunting Down Under, maybe?

Anyway, back to the business in hand. Horace, before he hits the slope, has to buy his skis. They're in a hut on the other side of a busy road and they cost ten dollars - Horace starts off with forty. If he gets knocked down, an ambulance comes and takes him away, but only if he can pay a ten dollar ambulance fee. Would they really leave him lying in a pool of blood in the road if he couldn't pay? (Too true they would.)

Then comes the skiing bit. Horace has to be guided down the Hannekon run avoiding the flags, trees and any other garbage left lying around until he gets to the finishing post, then he gets another slope.

One would think a visit to the ski slopes with Horace would be quite exciting. On the contrary it's rather dull. All it really means is guiding a blob around a vast expanse of white trying to miss things that get in the way. Perhaps the Dynamic Diggers could find him something more exciting next time around.

Guide a blob around a vast expanse of white trying to miss things that get in the way. I think we need something a bit more exciting next time around.