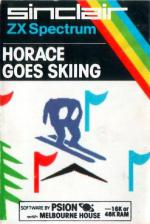 This is a sequel to Hungry Horace, from the same stable of writers, but not, I hope, the end of Horace. In this adventure, he has the princely sum of $40 and wants to go skiing, but first of all, he has to cross over a very busy motorway.

The traffic on the motorway is a first-class example of the use of animated graphics, but this does not stop it knocking poor old Horace down. Every time he is knocked down he has to pay an ambulance fee of $10, which makes the National Health Service seem a good proposition.

However, if Horace spends all his money on ambulance fees, he can earn some more by bravely dashing backwards and forwards across the motorway collecting points (hopefully). 1000 points will earn him the price of a pair of skis, or an ambulance ride.

If you can successfully get him to the ski slopes, there is more money to be earned by skiing down t.P the finishing line ... but watch those trees!

I would have liked to have seen instructions on the screen as well as on the inlay, but I found that by using keys 1, 2, 3, and 4 I' was able to keep a tight controlwell, tight ish - over the game.

Fun to play. You need a fair bit of patience to cross the road, but it is worth the effort.

Fun to play. You need a fair bit of patience to cross the road, but it is worth the effort.