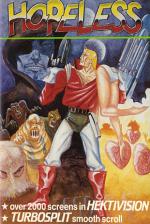 Hopeless. No, it's not the programmer's assessment of the game's quality but more a sort of statement about the enormity of the task that is facing you.

You are a former top sportsman, Al 'Dutch Meat' Bluntz but have settled down to the quiet life of being a bartender along with your girlfriend Jane. Your peaceul existence is, however, shattered one day in the form of Manic Munk, one of the most feared criminals in the galaxy. He has decided that he wants the bountiful charms of the luscious Jane for himself and to that end has kidnapped her and hidden her away in New Almere, a deadly part of the solar system totally under the control of the dreaded MM.

Are you a man or a mouse? Reluctantly, you drop the lump of cheese that you were nibbling and skyjack a passing space shuttle in hot pursuit of the Napoleon of Crime. After many hair-raising moments, you carefully dock the shuttle in the centre of MM's empire and set off to investigate.

The first thing that you notice about Hopeless is that the playing area is huge. You get some idea of exactly how vast your task is when you log onto one of the two computer terminals aboard your ship. This is a viewer terminal and allows you to scan New Almere as you work out where you must travel in order to rescue Jane.

The playing area scrolls over one continuous screen, the equivalent in size to some 2000 normal-sized screens. Jane is hidden deep within a heart-shaped structure but before you can release her, you must first find a way of destroying the fourteen heart barriers that block your way. In order to do this, all you need to do is make your way to all the terminals that contain a heart symbol.

It ought to be easy as they very kindly flash for you as you examine a map of your surroundings. Admittedly, there are a couple of duff terminals but nothing that a sporting superstar like you can't handle.

Terminals play an important part in the game. Apart from the ones already mentioned, there are two and four way switches (you will need to operate one of these if you are to get out of your spaceship), compass terminals to help you find the quickest route to a chosen point, top ups for your rapidly diminishing supplies of fuel, energy and strength and teleports. These will transport you to anywhere that you want to go with the proviso that the receiving terminal must be outside one of the structures. The nearest teleport to your ship is straight up, following the left hand edge of a huge star shaped structure.

You have two modes of transport available to you. Walking when inside buildings and flying for deep space. Before you access a terminal though, you must be in ambulatory mode (walking to you and me) and it is all too easy to forget to start flying again in the heat of the moment.

You also have three different defence mechanisms against the various nasties that MM has employed to defend his empire. These are an all-round energy shield, a laser and a good old fashioned Karate kick to the more tender regions of an aliens anatomy. Swapping control between transport and combat modes is controlled from the function keys and displayed as a series of icons on the control panel together with compass, system information and energy guages.

The monsters are many and varied. By far the meanest is the Manic Monk who must be destroyed at all costs. There is an audible signal to warn you when he is about, giving you time to switch on your defence shield. Other nasties include spider crawlers, jumping jollies, wally weirdos and bat brats. These are not your only hazards and it is all too easy to walk into energy beams that materialise all over the place.

Hopeless was written by the Dutch group Radarsoft (they of Floyd the Droid fame) and is an excellent mix of strategy, platform game and arcade adventure. Its greatest asset is its playability, unusual in a game this big. There are enough different structures to be explored to keep life varied as you find out what is going on and completing the entire task will keep even the most ardent games player quiet for some considerable time. Well worth investigating.

An excellent mix of strategy, platform game and arcade adventure.