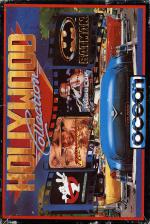 Hollywood, eh? Sunset Boulevard, Jimmy Stewart, sun, sand, surf and money... dream on 'til you can dream no more. Failing to acquire a one-way ticket to Los Angeles I popped out for some popcorn instead (microwave buttery flavour - mmm, lovely) and settled down to this nifty little package of last year's movie games. (Just in time for Christmas too.)

I can't believe there's anybody out there who hasn't already got a copy but there you go. Lots of levels, crisp mono graphics, and more blasting than you could reasonably ask for - it's even got an early version of Oceans now-traditional puzzle sub-game too. Playable and efficient, if slightly samey-looking now, and deserving of a big YS 8 when first released. Rating: 85%

Ocean's other contribution scored well too - a Megagame no less. You're Batman and you've got to find the Joker, which you should be able to manage after two Robo-style warehouse shoot-'em-ups (with added Bat-rope swingy elements), a couple of less interesting driving sequences and the obligatory puzzle sub-game. Fast 'n' furious, the massive opening and closing platform beat-'em-ups are astounding. Rating: 90%

Reviewed at a stonking 92, the four levels of Indy remain remarkably faithful to the big screen - and very playable to boot! There's the chase along the roof of a train, various platform and ladders beat-'em-up bits (with puzzles), even an airship sequence, where the screen bobs up and down as if you're floating! Smooth gameplay, neat puzzles - if you're not a shoot-'em-up fiend this could be the highlight of the pack. Rating: 92%

Three fairly thin (though quite pretty) levels and a horrendous multiload make this the duffer of the pack. Each level is well put-together and quite different, but I cant really see you playing for long. Rating: 70%

I'm not too sure about the wisdom behind this package - just check out this months charts to see how well some of this lot are still doing on their own - but for the punters (especially those who've not yet bought Robo or Bats) it's undeniably good value. (Not as good as microwave buttery popcorn though.)

Three and a half strong games, and all big names too - excellent value for beginners.

Three and a half strong games, and all big names too - excellent value for beginners.