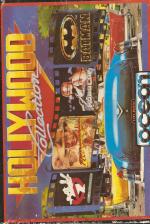 The tenuous link between the four games on this compilation is that all of them are based on their film counterparts.

The not-so-tenuous link between them is that they are all rather, rather good. This compilation is an absolute cracker and comes as a real treat, bearing in mind that most of the titles are very recent indeed. All of the games are excellent, and complement their respective movies beautifully. Outstanding value - buy it!

Whoooo... the streets of New York are no longer the safe and wholesome place they used to be. Even the muggers avoid the dark and mysterious corners of the city. Why all this fear? Why all this terror?

Slime - that's why. Great, congealed, glutinous rivers of sticky, icky, snotlike slime. Not just your ordinary pool of bogies, either - we are talking supernatural, spook-a-licious, Scooby-Doo kind of slime. In short... Ectoplasm.

And where does all this slime come from? The blinkin' Twilight Zone, probably. And where are the Ghostbusters when we need them most? They are being sued for every penny they have by the city of New York, who decided that the antics in the first film were some kind of giant hoax.

What follows if a platform-cum-shoot-'em-up sort of thing with three levels of supernatural laughs-a-plenty. Starting in a sewer, you are lowered by rope down a huge chasm dripping with slime and crawling with spooks, and you absolutely do not want to bump into a pair of big hairy ghoules in a dark tunnel. Groping ghostly hands try to pull you to your doom, or sever the taut cable that is the only thing between you and a solid braining at the foot of the tunnel. Collect the various goodies as you descend, grab a sample of slime and move on to the next level.

The action continues inside the Statue of Liberty, which you have to guide (it walks, seriously!) along Broadway, avoiding contact with ghosts as you go. You must replenish your ever-depleting supply of lubricating slime, or face the dire consequences.

Should you complete the second section, you are faced with the third and final level. More rope-swinging this time, as you attempt to save Sigourney Weaver's sprog from the dastardly clutches of Vigo the Carpathian (made-up name).

A dark shape stands silhouetted against the full moon. Atop the highest building in Gotham City, he pauses a for moment, and then leaps from his perch, cape billowing in the night breeze. He swoops, and reaches for an out-stretched flagpole, grasps it, flips over, and hangs there for a while, almost like a bat...

Yup! Beginning in the platform-filled realm of the Axis chemical plant, the scenario of the first section is more than a little like the Capcom arcade hit Bionic Commandos. The caped crusader swings deftly from ledge to ledge, dealing out swift and brutal justice to criminals, with the aid of a well-placed Batarang. Moving on, you encounter the nasty, despicable killer of your parents, Jack Napier. Knock him into a vat of radioactive sludge, and move on to the next stage.

Here, you tear through the streets of Gotham City in the souped-up Batmobile, using a well-timed batrope to aid you as you speed round tight corners...

After all that excitement, it's time to relax with a reasonably sedate puzzle game, in which you try to come up with a cure for the Joker's fiendish laughing gas.

Then you race from here to the Batwing, and stop the gas-filled balloons from delivering their hysterical, but deadly, payload of laughing gas. Back once more in the violent streets of Gotham, your final task is to scale the heights of Gotham Cathedral (more platform fun), and reach the final showdown with the cackling loon himself.

Flawless in both design and execution, the excellent graphics and decent music mean that finishing the whole game will be a long but enjoyable job. Brilliant, and quite unbelievable as part of a compilation.

The man with the hat and the whip is back - he's brought his dad and a little brown sack. The Nazi scum are at it again, and it's Indy's task to sort them out. They want to find the Holy Grail, but Indy's dad sent the map in the mail. It fell into the clutches of a nazi called Helga (Er, um, what rhymes with Helga?)

Anyway, in this epic you and Indy have to negotiate platform and ladder-type screens in the quest for the Holy Grail, and pretty much follow the plot of the film in the process.

AA gave this game a Rave in issue 49, and with good reason too. Wonderfully-drawn (if Specccy-port mono) graphics, good animation, and nice tunes all combine to make this a great film tie-in and a good game in its own right.

A couple of minor gripes - the sprite collision detection is less than generous, and Indy seems to mistime jumps, even when your reactions are spot-on. It is less of a challenge than first impressions may lead you to believe, but it never gets too easy, and you'll have a good few weeks' enjoyment trying to find the Holy Grail, and win the girl, and even save your dad while you're at it.

Alex Murphy, unfortunate victim of a crime wave in Detroit, is blown apart by a vicious crim. He wakes to find that the remaining bits of his body have been rudely transplanted into a robotic exoskeleton.

Murphy can't remember diddley-squat about his previous life, but emotions are still present and, as time progresses, the mechanical copper starts to remember more and more. Most of the things he remembers are about his death, and the nasty bad guys who killed him. Thoughts of revenge take form, and the near-indestructible powerhouse begins his quest to track down his own killers.

The game is a shoot-'em-up of sorts, where you stalk the streets of old Detroit, blasting the assorted criminals using a varied selection of firepower ranging from fists to demolition cranes. Power-ups are available, including a very impressive assault cannon, capable of quite stupendous feats of destruction.

The action is interrupted at regular intervals with a chance to calibrate your sights on a firing range, with your targets being actual felons rather than clay pigeons. And there's a subject identification section, much like those old-fashioned sliding puzzles.

Graphics and sound are reasonable, and the product has a very slick and polished feel to it. Possibly the weakest of the bunch, but still an excellent game.

All of the games are excellent, and complement their respective movies beautifully. Outstanding value - buy it!
Logout