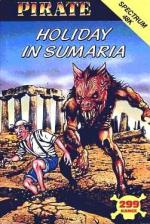 Arghh I've seen some poor games in my time mate but this just about takes the biscuit.

The idea and most of the graphics are just poor quality versions of chunks out of far, far better games. You guide Sid through the maze of rooms (all from the familiar top right-hand corner three dimensional view point) he jumps on to things that look suspiciously like giant crisps, pouffs (the things you sit on) and mushrooms. Pick things up, drop them, push things around, avoid the monsters. Yes, we've been here before and it looked better last year. The programmer has even had the gall to introduce a monster that looks incredibly like the Sabremans wolf incarnation from Knightlore but jerky and crudely drawn!

The graphics are disappointing, too - because you know what they should look like - and the response is basically yawn making. Even at £3.00 this one isn't worth it

Cheap and nasty take-off of Ultimate and Gargoyle games like Alien and Sweevo's World.

Cheap and nasty take-off of Ultimate and Gargoyle games like Alien and Sweevo's World.