﻿ Holed Out (The 4th Dimension) Review | The Micro User - Everygamegoing

Published in The Micro User 7.04 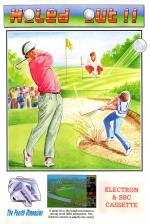 A fairway to spend your time

The Fourth Dimension should be on a winner here with what is the best golf simulation I've seen on any Acorn machine. It is packed with features: Two superbly designed 3D 18-hole courses and all the hazards you would expect to find on the real thing - trees, rough, bunkers and water.

The easier course, Cone Links, is quite a challenge and after mastering this you might just be ready for the second, Pine Isles. This is quite a different ball game altogether.

You can play either strokeplay or matchplay. The idea with the former is to finish all 18 holes in the least number of strokes, while in matchplay the winner is the player who has won the most holes.

Up to four can take part with each selecting one of four skill levels from beginner to professional. The one selected dictates whether the physical hazards or wind strength and direction influence your play of a hole. For example, as a beginner only the water will affect your next shot, whereas as a pro you could be playing from a bad lie in deep rough into a strong headwind.

For all shots up to the green your view is from behind the golfer. To the side of the screen is an information panel displaying details relevant to the hole. You select a club using the Z and X keys from a range of three woods, nine irons, a pitching wedge and a putter.

Next you set the direction to hit the ball by moving a cursor left and right across the course. Here, with the relevant difficulty level you must also take into account the wind - represented by a circle with a line coming out of it. The line points in the direction the wind is blowing while its length represents its strength.

When the shot direction is set you must attempt to allocate its power using the meter. As you press Return a sliding bar advances from zero towards 100 per cent and pressing it again sets the percentage of power and causes your nicely animated golfer to take a swing at the ball. Using Z or X instead of Return when the meter is advancing will put either a hook or a slice on the ball.

When the ball is hit, its shadow travels along the ground giving an impression of distance. When it hits the ground, the way it bounces and comes to a stop is also very realistic.

Now and again the hole you are playing might have a path running along or across it. These are very useful because, if you are skilful enough, you can make the ball bounce on the path to make it travel further.

A ball that lands in water is declared lost and costs you two strokes. Landing in a bunker has two possible outcomes - the ball is either plugged or you have a good lie. The latter is still a difficult shot but a plugged ball is sunk into the sand and is much harder to play and the outcome of the shot less predictable.

When you reach the green the screen is redrawn and you view the scene from above. The indicator in the panel now represents the slope of the green instead of the wind. The line now points down hill and its length shows the steepness of the slope.

Again when you have set the direction of your shot, set the power and watch the golfer swing into action. There is also realism here with the ball bouncing up off the edge of the cup if you hit it too hard or running round it if you're a little off.

After each hole, the score card is shown displaying all the players' progress. During strokeplay it shows each player's skill level, the number of shots and his score related to par. In matchplay the score is replaced by the number of holes by which a player is winning.

There is alot more to this game than just whacking the ball down the fairway. Each hole is a puzzle in its own right and you have to plan your shots carefully and take the utmost care in selecting the right club and power.

There are precise maps in the well-documented instruction booklet to help you plan your strokes. There's also a very useful quick reference guide to the distances - total, in the air and along the ground - that the ball will travel when using the various clubs.

The graphics are cleverly done using dithered colours to produce pastel shades on a four colour screen. Sound is restricted to the swing of the club, the striking of the ball and a few other minor noises such as a splash when your ball takes a dive.

I thoroughly enjoyed the time I spent with this simulation. If you're a golfing fan wanting to keep your hand in - buy it. If you are not, still buy it - it will keep you entertained for hours and hours. This is a test of skill not to be missed.

Buy it - it will keep you entertained for hours and hours.