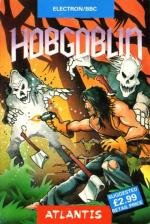 Hobgoblin is a flick-screen, semi-scrolling arcade game, in which you play a warrior called Zanok. It's semi-scrolling because when you reach the extreme right of each screen, you get a scroll effect as the next screen scrolls quickly on from the right and Zanok is placed back on the extreme left. So, really, it's little more than a cross-the-screen game. Zanok wears a suit of armour, although not the visor which, considering he has a giant head, doesn't seem like the most sensible of decisions. Actually, for all the protection the armour gives him he might just as well be naked, as Hobgoblin is a game which kills you off on any contact with either a bad guy, or one of his missiles.

The wafer-thin plot is that you must recover the sacred Golden Orb of Altoris and, should you dig in your heels and complete Hobgoblin, you'll find it about sixty screens to the right of your starting position. The difficulty, as you might expect, is getting to it. Each new screen looks innocent enough as it scrolls into view but, in Hobgoblin, looks are very deceptive. Screens which appear to be completely empty tend to allow you to get partway across them before a nasty runs on from the right, giving you little time to react. Some nasties, including one that looks like part-man, part-bull, move at double your speed, and will take you out within half a second if you just happen to be standing in the wrong place at the wrong time.

The majority of the nasties, however, are skeletons. Considering they're not only dead but deadly too, they seem pretty jovial characters. Their favourite pasttime is to come steamrollering toward you, flinging bags of sand or throwing knives at you at a ninety degree angle. If you time your jump correctly, you can jump whatever it is they've thrown at you and, with another well-timed jump you can also leap right over their heads. However, care is needed because this is one of those games of relentless pace. For example, a skeleton comes charging at you, throwing a sandbag before him. You jump and clear the sandbag but the arc of the jump sends you right down into the skeleton himself, equalling instant death. Instead you need to jump the sandbag by jumping straight up, then jumping in an arc over the skeleton's head. However, there's not enough time to achieve that unless you're standing in one exact place on the screen...

This example perfectly demonstrates the gameplay of Hobgoblin. It's a little similar to the classic Ghouls 'N Ghosts, although not nearly as tough (or as famous). The bad guys on each screen always appear at the same time and do the same thing - so once you've committed their attack pattern to memory, you will get further and further in the game. The skeletons, bowmen, ghosts and mutant dragonflies look pretty but have no actual intelligence whatsoever. Indeed, they only cross each screen in one direction, they don't even turn around.

The problem is with that lives counter - only presenting you with three lives is rather unsporting. The first time you play, you're likely to lose them all on the first couple of screens, simply because a skeleton may wander in from the right just as you are about to 'exit' screen-right, killing you off instantly. You start the game equipped with spears to throw at the enemies, but there's also another irk in that some enemies require more hits than others. On the first few screens, for example, skeletons require just one hit with a spear to disappear, so you might reasonably conclude "one spear defeats one skeleton". But not so, skeletons from screen four onwards require two hits, even though these skeletons look identical. You lob one spear at them and they carry on regardless, and before you can jump or fling a second spear, you're dead. Again.

Then there are the bowmen who stand at attention constantly firing a stream of arrows either at you, or over your head. When you encounter one of these, timing is everything. You have to gauge exactly the range that the arrow covers, stand right outside that range, sidestep in, take a shot at the bowmen, listen for the beep signalling that it hit him but sidestep back out before the arrow takes you out. Repeat five times to defeat him.

Whenever you defeat an enemy, he leaves behind a glowing skull (extra life) or some other bonus which adds points to your score or changes your weapon. This is the only thing that injects some degree of randomness into the game. Without it, it would literally be a case of memorising where you have to stand and when you have to shoot (or run away) to progress through every single screen. And, when you lose that last life, the game sends you all the way back to the beginning. If you're playing with an emulator, you can of course save your position every couple of screens. But on the original Electron hardware, if you seriously want to attempt to complete the game, you're going to be playing those first screens hundreds of times just to try and get a bit further.

I think that, for most people, their initial impressions of Hobgoblin are good. It has a very impressive loading screen, good colourful graphics, adequate spot effects and is very responsive to controls. What's not to like here?

After a few goes however, you begin to lose interest. It really feels very silly to have to concentrate so hard on every screen, and if you get picked off despite that concentration, you tend to despair. The ending, if you can reach it, is quite anti-climatic too.

Now, considering Hobgoblin was only a £2.99 budget game, it probably deserved more praise than it garnered on release. Electron User was the only magazine that reviewed it, and it didn't do the job properly. Disorderly waffling prose concluded that it was a reasonable graphic adventure (It isn't a graphic adventure at all; it's an arcade game!) and would be loved by graphic adventure Citadel fans... the latter point was made a few lines below a paragraph stating it wasn't as good as Citadel. It then awarded it a lacklustre five out of ten.

Personally, I think it deserves a little bit more respect. It's far from being brilliant, and it's obviously a major challenge, but there is a real market for this type of 'scrolling knight vs cutesy monsters' platform game. A certain type of gamer will really enjoy Hobgoblin and, considering you can usually pick it up second hand now for a few quid, it's a reasonable way of idling away an afternoon or two.