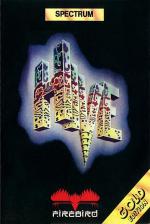 Hive puts you at the helm of an electro-mechanical 'Grasshopper' ship on Gamma V, a planet populated by insectoid races. The mission is hazardous: penetrate the hive of your enemies, the dreaded bees who threaten the very existence of your race, and kill their queen.

The bees are ready and waiting for invaders - the static defences of their hive are supplemented by guards and the labyrinthine nature of the hive itself makes penetrating it a tricky task. The hive consists of eight levels of twisting tunnels and includes locked sections that can only be entered if you hold a key.

The ship starts equipped with one laser, two pylons and three position markers (used for mapping the tunnels). To add to these there are useful items along the route which can be picked up and used. The most important of these are pylons which recharge the ship's energy banks. Carrying two pylons increases the Grasshopper's energy level, while carrying one serves to keep the power constant. Without the aid of pylons, the energy reduces slowly to a fatal zero. Other collectible objects include keys, shields, treasure and a telescopic arm.

The screen shows the view from front of the Grasshopper ship as it moves down the long, twisting passages. It can accelerate, brake, jump over obstacles in the floor and crouch under spikes hanging down from the roof. Complete rotation can also be executed, so you can explore the tunnels on all sides. The ship is not damaged by scraping along the hive walls.

The game can be saved at any time by pausing and recording a 16 character code which appears on screen. The Grasshopper ship re-starts at the appropriate place when this code is re-entered.

A control panel at the bottom of the screen shows which objects the ship is carrying. It also displays the life level, score, high score and contains two panels; one of these lights up as the ship passes a junction - the other flashes if the ship is being attacked from behind.

The hive contains a series of locked gates, which cannot be passed through without use of the appropriate key. The stronghold is inhabited by a series of insectoid creatures that have varied attack capabilities according to the level they live in. The locals can be eliminated with laser fire, but first you have to locate a laser... One guard, the jailer, is virtually indestructible - the Grasshopper ' s only defence against him is the Jail Card, which can also be picked up along the way.

Once the eight-levels have been negotiated, the mission ends when you lob a smart bomb at the queen.

'Despite lack of scenario and weird gameplay I really like the Hive. Perhaps it is the sense of not knowing what's going on that makes this so compelling. I can see myself getting bored with it in the distant future, but I'm sure that it'll keep me going for a month or so. Graphically this is pretty un-inspiring - loads and loads of blue circles with the odd something else cropping up every thirty seconds (a bit like Elite). As with most vector games, simple graphics create the best effects and these graphics are basic. The sound is poor - there are hardly any effects and no tunes. Torus seem to have done it again - I'm sure that Hive will become the cult game of 1987.'

'This is too much. I feel that Hive contains too many keys for the average player, which is a pity as I feel that it is very good apart from this. Graphically it's perfect: the wire frame graphics suit the maze feeling well, and movement is very good with the speed controls giving an excellent feeling of inertia. Hive is good fun at first but I got a bit bored travelling around the maze, and feel that the game doesn't contain anything very compelling or addictive. I'm sure that Hive will appeal to some people, but I couldn't get far enough into it to enjoy it. Worth a peep.'

'Loads of little circles dashing about the screen - not the greatest idea for a graphical stunner, or at least that's what I thought at first sight! Ha! I was completely and utterly WRONG! They really do create an excellent effect as you feel yourself hurtling down step inclines, or straining up the hills. Unfortunately, I didn't enjoy the game itself quite so much. When the novelty of the tunnel effects eventually wore off, I began to get a little bored. I really don 't think Hive has got as much to it as it could have - despite the neat effects, there's a not enough game content.'

I'm sure that Hive will appeal to some people, but I couldn't get far enough into it to enjoy it. Worth a peep.