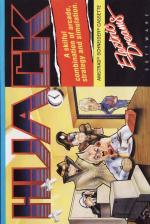 Hijack is an arcade adventure. The object of the game is to defeat the terrorists who have hijacked a vehicle.

You are in charge of the Hijack Division, a government department dedicated to stamping out terrorism. You must either raise enough money to give the hijackers, or raise enough military support to storm them. On the other hand, you could send in the diplomats to try and talk them out.

You start off in your office. Lifts take you up and down to other rooms and departments. Other members of the government staff walk around, and whenever they are in the same room as you, you can ask them to perform specific duties. The President is the only one who can fire you. You may ask him for transport to the hijack scene, or for a deadline extension, or for military, financial, or political support. He's quite tight and rarely gives you anything without quite a bit of pestering.

The other characters which you may control are:

Once given the access code for the president's door, you may go to the top of the building and get into the helicopter, which will fly you to the scene of the hijack.

I like this game very much. The graphics are not bad, and the game is fairly addictive. There is little or no sound, but this does not detract from the game. The lifts taking you from floor to floor are well depicted and add to the game's attraction. Unfortunately, the characters move very slowly and you really need a whole day to get into the game.

I like a bit of political intrigue, and although this isn't quite on the level of Fourth Protocol it gives a taste of it. It shouldn't take you long to get into the game and the increasingly difficult tasks will keep you there. Not a blockbuster but plenty of potential for fun.

Get through the door into the president's office.

P. Exceedingly addictive.
P. Many, many glorious rooms.
P. Each character has a life of its own.

N. Walking is slow and cumbersome.
N. Takes a long time to play.

Exceedingly addictive... Not a blockbuster but plenty of potential for fun.