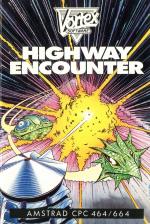 This is an encounter of the closest kind, providing more thrills and action than you may be able to cope with. The daunting task is to guide a super weapon along a peril-infested highway to destroy an alien base. The highway runs from bottom left to top right of the screen, rather like the classic shoot-em-up Zaxxon. Moving past the edge of the screen causes the picture to flick to a new area of road - there are 30 sections in all before you reach the alien base.

The road is composed of a trendy-looking grid and on either side appear picturesque scenes of gardens, woods and a bridge over a river. Later on, this switches to a cave background as you reach zone zero. You start at zone 30 with five 'vortons' and a 'lasertron' with which you must conquer the invading aliens. The vortons are Dalek-like robots that can shoot fiery balls out of their heads and scoot about the roadway. The lasertron is a deadly weapon that will destroy the alien stronghold at zone zero - if you can reach it.

The vortons and lasertron begin by moving into formation in a line with four vortons behind the pyramid-shaped lasertron and the fifth out front under your control. This procession will move diagonally up to the top right of the screen except when blocked by other objects. The one free vorton can roam as it pleases, clearing the way of objects and aliens.

Controlling this droid can be a little difficult since it follows the Knight Lore and Alien 8 style of rotating left or right and then moving forward in the direction you're facing. This calls for a cool head so that you don't panic under pressure and charge aimlessly about in circles. Once mastered it works well although it will provide flashes of frustration. The lasertron cannot be moved sideways and ploughs its way up the middle of the road, which you have to clear.

This is, of course, easier said than done Harmless obstacles like oil-drums, brick blocks, clear blocks and floor patches may impede movement and have to be bumped or. shot out of the way. Other more dangerous devices are the spiky balls and flame points.

Spiky balls bounce from side to side across the road and you either have to time a dash past them or interpose an object that they can bounce off, leaving a way clear. Flame points don't move but are often in strategic positions to make moving difficult. Both kill on contact.

When you do lose a life, control is switched to one of the other vortons in the pack and you can move him out and into action. Vortons not under your control can also be killed if one of the many wandering aliens hits them These aliens also kill the main vorton but can be blasted by him.

There are two main tactics that can be employed. Firstly, you can escort the lasertron all the way taking each screen at a time, but this may lose you rear-guard vortons as aliens stray into them. Alternatively, you can keep them in reserve and pave the way ahead with a single vorton. This means advancing another robot every time you lose a life but it does keep the reserves well out of trouble. You have to get to zone zero before a time limit runs out, but the only other constraint on your activity is a power gauge that only allows you to fire in bursts of three bolts from the vorton. If you can get to zone zero, the sequence that follows is well worth the effort and leaves you to complete another faster and harder run.

The 3D graphics are beautifully smooth and reminiscent of Ultimate's 'Filmation' but faster and with a lot more action. Sound is simple zapping effects. The instructions belie the brilliance of the game but from the terrific loading screen onwards, it's sheer addiction.

The beginning of the game is superb, as the Vortrons line up with the Lasertron for their arduous journey. The standard never lets up, and neither does the pressure. Spend too much time admiring the slinky graphics and you're a goner. But you'll probably be a goner anyway - it's a hard game to beat.

The Vortrons are tricky to control and, at moments of crisis, it's almost impossible not to panic. Result: you turn the wrong way and get frazzled. Once you get used to the control, you can make more progress. But in later zones, I found the combination of aliens and defences just too much for my feebly slow responses. And five Vortons just wasn't enough.

N. Control may take time to adjust to.
N. I haven't finished the game!

Smooth 3D graphics and 30 diabolical screens. Note that the controls may take some time to adjust to.