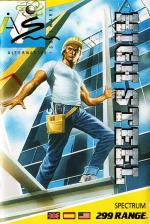 These Ones That Got Away can get depressing. More often than not, it's patently obvious why the games got away in the first place. Then, out of the blue (what an odd expression that is. What's 'the blue'? Presumably the sky, but how many things drop out of the sky? Surely it would be more sensible to say 'out of the grey when I was trying to cross over to the corner shop' or something similar) you get a game like High Steel, with... erm, hang on. I've completely forgotten what I was going to say before that brackety interruption. Damnation.

Ah, that's it. High Steel is a jolly surprise, as it's a fab little game. It's also utterly original. You play a construction worker, and have to build various floors of a gigantic building. These levels consist of upright girders (the walls) and bricks (the floors). While you're rushing around trying to do this, various gremlins are crawling about, eating the bricks, knocking you over and generally getting in the way. To add complications, the crane driver, who delivers extra girders and so on, seems to be ever so slightly mad and keeps putting things in entirely the wrong place. Also, bricks from higher levels keep plummetting down and bashing you atop the bonce. It's tough at the top (of a forty-storey building, that is).

Now these are only the bare bones of this incredibly complicated game. The inlay folds out in to something resembling a model glider, and is packed with rules and regulations governing the way the crane moves, or what each species of gremlin can do to you. or how exactly you place a girder. It fair makes the mind reel, but at least playing the thing makes everything clear. Well, more or less. So to avoid lots of you getting the prog then jumping out of windows, we'll run through a sample game. Now pay attention. I may be asking questions later.

You start off having to build a single level, and immediately the crane starts dropping bricks all over the place. Four of these can be piled on top of each other before you have to move to a new space, and you can only place a girder in a clear space, so the first thing to do is, erm, make a space (I'm so glad you're clarifying things tor the readers. Ed) Once a girder's in place, you can swarm up it and start laying bricks. Now here's the bit the instructions don't mention - each girder can only support two bricks. Evilly, you need to lay a floor of at least five bricks in length to complete the screen. Bah. Oh, and all the while these horrible gremlins are slurping about in a dreadfully messy manner. You have to push them off the scaffolding or (on later levels) shoot 'em with your rivet gun.

There. Sounds brilliant, doesn't it? Worth a magnificently high mark, eh? What - the dodgy controls? Okay, that's true, you do tend to loose a killer rivet without meaning to, which is especially annoying considering one of the gremlins just spits them back at you. Erm, and you're correct in saying the randomly falling bricks get very annoying. But those are only minor points! Oh. all right, they're pretty major ones. (Shucks.) But what about the massively positive bits, eh? The graphics are big, chunky, smooth and well animated. There are a couple of buzzy tunes (but no in-game effects). Each level brings new obstacles like banana skins (yikes!) and the gremlins are constantly mutating in to even nastier forms. Honestly, it's like an early-'80s arcade game - a sparkling game design with billions of features sprinkled on top. I love it I'll tell you what - let's agree to differ. How does 76% sound?

High Steel is like an early-'80s arcade game - a sparkling game design with billions of features sprinkled on top.