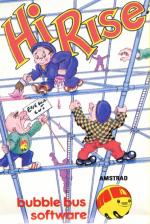 Some games attract you with pretty graphics, others amaze your ears with music but some hook you with pure addictive gameplay. This is a game in similar mould with dozens of tough screens to be negotiated.

Each screen consists of a maze of walkways connected by ladders. The platforms are often on three separate planes, although more complicated layouts also appear. The object is to turn the light blue floors white by running over them with a little animated figure. Once all the floor has been changed, you can move onto another layout. The layouts are often partially hidden by other platforms, so that sometimes you will be working blind with only logic and the noise of the man's footsteps to guide you.

The only things that can stop you completing the task are three other characters who chase about trying to catch the painter, thus removing one of his nine lives. This trio of enemies are intelligent too and can track you down a complicated section of maze and even split up so as to trap you in a corner.

The only defence against these guys is either to stay one step ahead of them, which isn't easy as they don't make mistakes, or to delay them with the two globs of glue you carry. These can be dropped anywhere on the floor and will stick the pursuers to the spot for a short period. Once the glue disappears from the floor, you can use it again, but only two patches can be used at once, which sometimes may not be enough.

The painter can step up a gear and speed away from his chasers at running pace, but he risks running off the end of a platform, and falling to his death. Falling isn't always fatal, though, since if he can land on a platform below, it will give him a big head start on the pursuers.

If he does get caught you have to restart the screen over again with the whole floor still to be painted in. As if this weren't complicated enough, there's a time limit on each screen which will also remove a life if it runs out. This limit is reduced rapidly if the man runs into dead ends.

When you do manage to paint in all of the floor, several new blocks appear. These are teleport squares which, when run into, will take you to another screen. There's usually a choice of more than one which will take you to different screens, sometimes back to a screen that may already have been completed. The routes always stay the same and if the man dies on an already-completed screen you don't have to do it again.

Our pre-production copy had 55 screens but the finished version should have 90-odd and you can start at any of them. It certainly won't be a game that anyone is going to finish quickly, if ever, because some of the layouts are really mean.

I'm not sure I want to see my computer opponents displaying "intelligence". It makes things very difficult for me. It means the game is very hard. Of course, if you like hard, fast games with umpteen screens and lots of hookability you might like this. But it's too much for me.

N. Graphics and sound are simple.
N. High addiction can also mean a high frustration element.
N. Control at junctions and the bottom of ladders can be frustrating when you've an enemy right behind you.

Addictive gameplay that keeps you trying to complete screens.