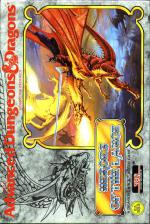 After having played - and finished-Heroes Of The Lance on both the ST and the Amiga, I looked forward to the release of the Spectrum versions with a little apprehension. On receiving the game I was pleased that the superb packaging, at least, was identical; a superbly-illustrated box and a well-written. 25-page rulebook. But one addition, a trouble-shooting guide, soon proved essential when the game crashed four times! With two tapes of data to juggle I began to feel my fears were about to be confirmed.

However, once the game actually loaded I was pleasantly surprised. The opening screens, with pictures of all the game's characters, were great and accompanied by some almost hypnotic music, perfectly set the scene for adventuring. The game proper starts with a smallish, but well-detailed character standing in a dungeon.

You control him with a joystick, and also the off-screen characters he represents - Tank, Raistlin, Flint, Sturm, Tasslehoff, Caramon. Riverwind and Goldmoon. Your mission is to guide these brave adventurers through this evil-looking dungeon and obtain a set of holy items called The Disks Of Mishakal. Only by queen Takhisis creating the most evil empire in all eternity.

Of course. the Disks are not just lying there waiting for your group of heroes to grasp them in their sticky little maulers. The Disks are actively and professionally guarded by such nasties as Spectral Minions, Draconians, Trolls and hatchling dragons - to name but a few.

Even if your brave band manage to get into the mysterious place where the Disks are kept, they will still have to get past Kisthanth - a giant Black Dragon, who sprays lethal acid at all and sundry. She can only be killed in a special way - which you have to discover on your travels.

Each of the adventurers you control are depicted at the bottom of your screen via grey portraits, each with a small vertical bar showing their health. Death isn't too much of a frightening thing though, not when you have got someone like Goldmoon in the party. She has a magical staff which, if used correctly, will bring back to life any deceased character. She can also perform eight other divine miracles, such as healing your party's wounds to protect you from your evil opponents.

Mind you, Raistlin is no slouch either as he has a magic staff. He can cast eight spells which can do anything from entangling an opponent in a spider's web to merely putting them to sleep.

While lacking such powers the rest of your party are great at fighting and detecting.

Combat plays a big part of the game and is dealt with using the joystick. Spells, and picking up objects, are accomplished by calling up menus and flipping through them with the joystick. One of the most useful options is save game.

While exploring the dungeon, entrances and exits are indicated by a flashing compass. Exploring them inevitably results in lots of combat and, if you survive long enough, discovering objects such as magical rings. superpower options and Gems which provoke unexpected responses from various monsters.

The graphics depicting the dungeon and the monsters are quite well put together - the programmers have utilised shading wherever possible - but they are by no means the best I've ever seen on the Spectrum. This said, after giving Heroes a thorough play, I found my original apprehension largely dispelled. Apart from a few loading problems, coupled with the reluctance of Goldmoon and Raistlin to cast certain spells in one or two life-or-death situations, the game has been converted in a very acceptable fashion and is well worth spending your hard-earned (speak for yourself - Nick) cash on.

Apart from the reluctance of Goldmoon and Raistlin to cast certain spells in one or two life-or-death situations, the game has been converted in a very acceptable fashion.