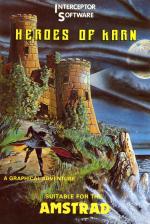 Converted from another computer, this clonebuggy comes with some very pretty pictures, and the dullest text layout of all time.

No account has been taken of the Amstrad window commands which would do a great deal to liven up a mainly textual display.

All the text uses the default bright yellow ink; the other 26 colours are completely unused. Like many other recent adventure programs, it is also practically a deaf mute. So much of the valuable RAM has been used by the pictures, the essential dialogue is unsophisticated and outdated.

Monosyllabic communication and an apparently small vocabulary make painfully slow progress inevitable. The sound commands are grossly neglected. The potential here for adventure programs is enormous, since storyline continuity and dramatic content would gain much from the 8912 sound chip.

Doing far more for the imagination than still pictures, the sounds of waves crashing on a storm-swept pebbled beach with gulls squawking overhead are all accessible, and in full stereo too for complete realism.

The usual verb/noun inputs are used in this program and the game can be saved for future use. Your mission is to release from captivity the four heroes of Karn, namely Beren the mighty, Istar the wise, Khadim the dwarf and Haldir the Elflord.

After battling with the powers of night, many salubrious hazards await you. Lots of entertainment here, especially for timeworn, weather-beaten speculators looking for another foray into the unknown.

Lots of entertainment here, especially for timeworn, weather-beaten speculators looking for another foray into the unknown.