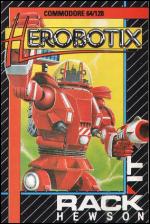 The Alliance of Space Pilots has stolen the Z-Ray Particle Accelerator, a maximum destructive potential weapon. A rebel sector of the Alliance is against this theft and has sent in a class IV 'Herobot' to capture vital information about it.

The action takes place on the ASP's flick-screen base, guarded by twelve types of droid. A laser bolt or an energy bomb is used against them, but contact with robots or their missiles depletes Herobot's energy. This can be replenished at sources dotted around the base.

An information panel reveals the energy level as four fluctuating bars, and also displays the score, droid status and gun parts collected. These parts are needed to blow up the door to the main computer, steal the information and escape.

Transporters assist progress around the complex, but codes are required to activate them. Computer terminals are accessed to reveal map sections and to shut down conveyor belts for a short time. Switches turn off force fields, thus allowing passage to normally inaccessible parts of the game.

Although it is by no means an original concept, Herobotix is a compelling game. This is in part due to the atmosphere generated by the graphics and sound: hollow, distant rumbles and robotic babbling effects complement a mixture of brightly coloured and sombre backdrops and a cute main sprite.

The large playing area requires mapping if any real progress is to be made, since energy points are vital to survival: finding one when your last ounce of plasma is flickering to an end is a huge relief!

There's enough blasting action and arcade adventure puzzles to satisfy addicts of either genre, and the complaints against it and its derivative scenario are minor considerations: Herobotix is playable, lasting and enjoyable, continuing the high Rack-It standard.

While not offering anything particularly new, Herobotix still affords much entertainment to anyone who can be bothered to spend a few hours at the computer with paper and a pencil, mapping the playing area and working out where all the energy points, transporters and gun components are situated.

Unfortunately, the action requires too much thought to have instant universal appeal, which is a shame, because it's obvious that a lot of thought has gone into the game's design and Herobotix puts up a good show on the graphics and sound fronts. Move your brain from neutral into first gear while playing and you'll enjoy it.

Hookability 82%
A compelling balance of progressive discovery and frustration.

Lastability 89%
A large environment to explore and enough action to maintain interest.

Overall 87%
An appealing mixture of puzzle plus shoot-'em-up action, and another first-class release from Rack-It.

An appealing mixture of puzzle plus shoot-'em-up action.