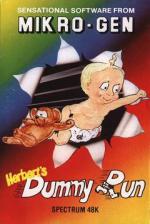 Herbert's Dummy Run, the new release for the Spectrum and the Commodore 64 from Mikro-Gen, is a continuation of the mishaps and adventures of the Wally family.

This time the youngest member of the family, Herbert, has got himself lost in a department store, and has only four and a half hours to find his parents before the shop shuts for the evening.

Like the previous Wally games, Herbert's Dummy Run is an arcade adventure with numerous arcade game screens included within it. Unlike the others, it is relatively easy to complete as long as you've had plenty of practice, according to Mikro-Gen that is.

Your aim is to find your way through the exciting and dangerous shop trying to find Herbert's parents in the lost and found department.

Instead of a percentage score to tell you how far you have reached in the game, you get a jelly baby score - different, I suppose!

There are various obejcts in the game which you must find and use to their best advantage. The tennis racket is obviously used for playing tennis, as you'll find out if you play the game. Although the uses of certain other objects, the bomb for instance, are probably not as straight-forward as they might appear.

The game is packed full of interesting, amusing and fairly difficult tasks for you to complete and riddles to solve.

Mikro-Gen are one of the few companies who consistently release better and better software. Herbert's Dummy Run is no exception.

Don't be a dummy - get to your local department store and buy it now!

A game packed full of interesting, amusing and fairly difficult tasks for you to complete and riddles to solve.