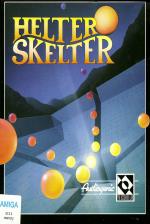 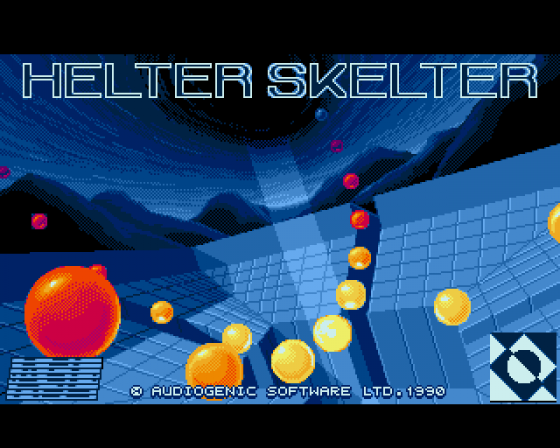 What do the words Helter Skelter mean to you? A spiral-shaped chute that you slide down on a mat? Well, for the moment forget about that, because the game Helter Skelter has got nothing to do with slides or mats, but plenty to do with platforms and balls.

The game takes place in one of those well weird 'other dimensions' we're always hearing about. This time the strange environment is a collection of rooms littered with walls and platforms which you must bounce about on. Oh, by the way, the reason you're bouncing about is because you are a rubber ball (well, I did say it was weird!). Some rooms wrap around so that zooming off the edge of the screen places you on the opposite side. In these rooms are bunches of creatures, ranging from square-headed gonks to oversized blue crows.

Above the head of one of the creatures hangs a yellow arrow. This marks the thingy that needs to be bashed by you, thus removing it from the screen. If, however, you land on a monster not marked by an arrow, it splits into two smaller creatures (but they don't split any further than this), maing more work for you. All the creatures must be killed in the correct order before the timer runs out, otherwise one of your lives is lost. 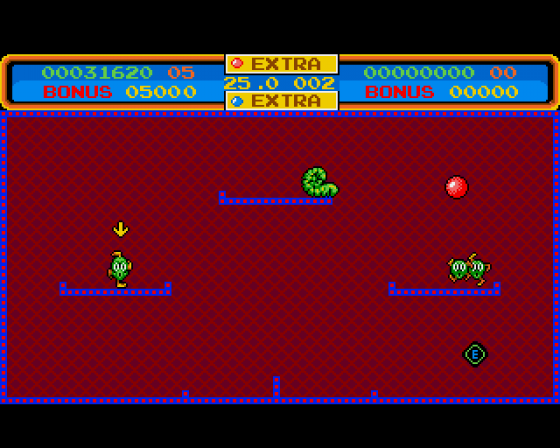 As well as being able to move left and right, you can hurl yourself at the floor to increase your bounce - but be careful, since every bounce decreases your bonus.

Occasionally, an icon may appear on the screen, giving you a slight advantage when you collect it. If you think that the screens are too hard, then you can alter them to your own design.

Quite often, games gain acclaim just because they're a bit wacky, which makes reviewing this a bit dodgy. Helter Skelter is a wacky sort of game, so I'm sceptical of giving it a high mark. But I've played it quite a bit now and it's starting to drive me up the wall!

The control is a bit tricky at first since the ball seems to have quite a lot of momentum. It takes a while to start moving and even longer to stop. Once this has been overcome, you can really get into it.

It's not the sort of game where you have just one more go, it's one of those games where you just keep playing and playing 'til you go bug-eyed! The password system means that you don't get too bored by having to play the lower levels all the time (but the high levels are *really* hard!) and the screen editor may extend its lastability.

There's nothing else for it, it's got to be another highly acclaimed 'wacky' game!

This is an unusual game in every respect, from the odd and basic sound effects to the gameplay itself. It's very cute, though, and I'm a real sucker for cutesy products (How to keep an idiot happy: give me a game of Bubble Bobble or Little Green Man and I'm well content).

All the creatures are neatly and imaginatively drawn, which makes you think that some of the simpler screen designs are going to be easy - don't be fooled! There are some real pilchard levels in there! At this comparatively low price, it's well worth a look, whether you like buck-toothed aliens or not.

Aaaagh! Ngaaaah! Wyagggg! Right, I think that's worked off all the aggression half an hour of Helter Skelter has just given rise to.

And all because of an innocent little bouncy ball and a couple of evil-grinning potato heads - aah! Yeah, well, now I've picked my shredded nerve ends off the floor let's get on with the comment. The graphics aren't exactly the sort to take your breath away, the gameplay isn't overly astounding, but the package as a whole is more addictive than Saturday Night Live after sharing a pint of Barbican with PG down The Bull.

For some reason that infuriating red ball never quite goes where you think it will if you're expecting fancy presentation and over-the-top Amiga graphics, give this one a miss, but if all you're after is a good old-fashioned mega-addictive, well-hard game then get this - you can afford £14.95!

Presentation 95%
Two player simultaneous action and a useful password system, as well as the screen editor.

Sound 56%
Nice speech and some DX7 sounds (What's a DX7? Those who don't know should ask Maff).

Hookability 74%
The strange control is a tad difficult to handle.

Lastability 89%
Lots and lots of levels to keep you occupied for a long time.

Overall 86%
A playable and enjoyable near-'budget' price platformer which should appeal to all fans of cutesy gaming.

A playable and enjoyable platformer which should appeal to all fans of cutesy gaming. 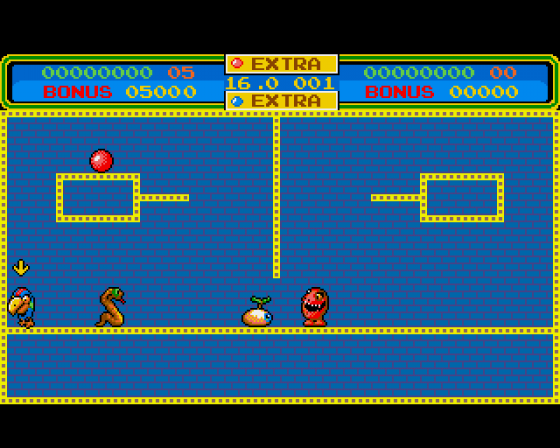