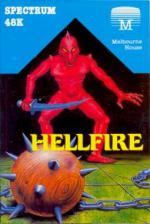 Hot on the heels of Gift From The Gods comes another game with its theme set firmly in the heart of Greek mythology.

You must re-enact the trials of Ulysses as he seeks to prove his worth to the Gods - who are a tough bunch if this game is anything to go by!

The game features three levels or "tasks". The first task involves climbing the slopes of Mount Olympus, home of the Gods, while avoiding tumbling boulders and the gaze of the Gorgon, which can prove quite deadly.

Ulysses must use his shield to protect himself from the Gorgon's glare. Once through the cave entrance at the top of the slopes, you'll find yourself in the temple of Knossos, packed full of minotaurs and an evil reptile creature called the Assassin - who attempts to practise his art on you!

If you manage to negotiate the minotaurs, the fireballs and reach the maze - which features Ant Attack style graphics - you are well on your way to reaching the Elysium Fields where you'll be able to rest for a while! However the maze is packed full of nasties and Ulysses must fight them off using his mace. No easy task.

Hellfire is an interesting development of the platform game. It features nice graphics and a pretty good line in playability.

However, I found the game difficult to get into. Climbing up the Olympian slopes is no easy task, but if you are a platform fan and like a challenge, take a look at Hellfire.

Features nice graphics and a pretty good line in playability. Climbing up the Olympian slopes is no easy task, but if you are a platform fan and like a challenge, take a look at Hellfire.