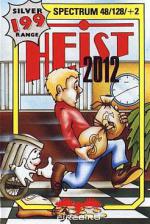 When I fist saw this, I thought 'Oh no, another Manic Miner/Jet Set Willy clone'. In a way it is, but in a way it's not (Hey! Profound! Ed) Granted, it's a platformer but it's a smooth, hard one (oo-er), which a lot of the time relies on pixel-perfect accuracy! It isnae bad!

The year is 2012. (Go on! Ed) Most of the world lives on credit (like the YS staff), though some still use hard cash. For these poor saps, massive banks have been set up, and the one you've decided to rob is, weirdly, full of platforms and ladders. Coo! The controls are left, right and jump sound familiar?) and your strength is indicated on a dinky little icon showing a muscled arm holding a dumbbell. Lose energy and the dumbbell gets lower, until you lose one of your six lives.

One of the main problems I had with JSW was that, when falling sever screens, the final screen (where you hit the ground) would repeat and repeat until I was well and truly mangled. This doesn't happen in Heist 2012, I'm happy to say. If you fall, and believe me, you will, you can continue the game happily, minus one life.

Otherwise, though Heist is virtually the dead spit for Willy - only smoother, slicker and more playable. Original it isn't, but if games were banned for unoriginality, nothing would ever be released!

Very similar to Jet Set Willy, though it's a format that still has its fans. Don't expect any great innovations!

Original it isn't, but if games were banned for unoriginality, nothing would ever be released!