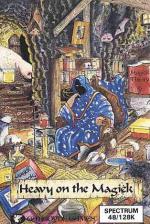 Heavy On The Magick

Gordon Hamlett is captured by the spellbinding world of Heavy On The Magick.

Some people never learn, do they? If you are going to tell dubious stories about wizards, it would seem to be a reasonable idea to make sure that the subject is not within earshot. And this is especially true if that subject, a certain Master Therion, is rumoured to be the cleverest magician in Ioemark, it not the whole of Graumerphy. So it really comes as no great shock to find yourself teleported up to ankles in murky water deep in the midst of a depressing and no doubt dangerous dungeon.

You are Axil the Able. Well, not very able really but people are polite in Gramerphy. You only just scraped through your examinations and are now ranked as a Neophyte - the lowest of the low in your chosen profession of magician. Your lack of talent though doesn't stop you from picking up a book from the table in front of you. Although a lot of it is incomprehensible jargon about spirit procurements and astral phenomena, you recognise it as being of a magical nature and are convinced that it will be useful to you and you try to escape from your predicament.

Heavy On The Magick is a graphical adventure game from Gargoyle Games. The command structure is of the traditional verb-noun variety with the verbs input as single keystroke entries. You tend not to notice the way text is entered though as you sit back and admire the superb graphics. Anyone who remember the large cartoon style characters of Gargoyle's previous games - Tir Na Nog and Dun Darach will be delighted to know that Heavy On The Magick features graphics that are bigger and better. The two top-thirds of the screen are devoted to the graphics window with three smaller information windows underneath. The illustrations depict the room that you are in with any tunnels or passages leading off, your character and any wandering monsters, objects or summoned demons that happen to be present. Apart from Axil's animation, about one in ten of the 250+ rooms feature additional animation.

The windows at the bottom of the screen are the information command and status boxes. The information box displays details of your inventory, location descriptions, character details and exit directions. Your status is assessed on three values - stamina, skill and luck. Their levels are determined at the start of the game but you can juggle with the initial values if you so desire. Stamina and skill are used to determine the outcome of anyu combat whilst luck is important in just about every decision that you make. Throughout the course of the game, these numbers will go up and down as you eat food, get wounded, pick up useful objects or poisoned ones. The most important thing to keep your eye on is stamina, for if it reaches zero, you die.

Your journey through the dungeons is made that much harder by the presence of wandering monsters. These include giant rats, skeletons, trolls, wraiths, hydras, Medusae and assorted lycanthropes - werewolves to you and me. Most of these you will need to kill outright before they do the same to you, but some you will have to talk to in order to get help or clues. One character who at first sight looks mean and nasty but is really quite friendly is an ogre called Apex the Aider and he crops up time and time again. All combat is resolved by the magick - usually involving the 'Blast' spell. Before you cast the spell though, be sure to look at the opponent's stamina and cunning levels and compare them with your own stamina and skill. If it is much higher than yours, you are likely to come off second best in any ensuing combat.

Once you have disposed of any monster, you are free to examine any objects that may be lying around, such as chests, cabinets or tables. Here you may find food, scrolls, talismans, books and so on. Be warned, a lot of the items that you find will be positively harmful and should be dropped immediately. A lot of things that you wish to examine and rooms that you want to enter will be locked and a lot of your time will be spent searching for a password which can then be uttered in the appropriate place.

You start off with only three spells in your book although as you progress, there is more magic to be encountered; some of this is spells that can only be used once, others get magically written into your grimoire. Your three initial spells are 'Blast' (already discussed under combat), 'Freeze' an object or monster, and 'Invoke'. This last spell summons one of four demons to your presence - Asmodee, Astarot, Belezbar and Magot. These demons all have different powers and must be summoned only when necessary as some of them object strongly to being disturbed. Before invoking a demon, you must possess certain objects such as the correct talisman. Hints as to what else is required are given in the instruction book.

One of the nice things about Heavy On The Magick is its attention to detail. If you input an incorrect command, Axil shrugs his shoulders in incomprehension. If you take poison, he clutches at his throat, the entire magick system is based on ancient treatises as is your promotion through the ranks to Zelator, Practious and hopefully eventually to Magus.

Should you find your way out through one of the three exits, there may well be more in store for you as Gargoyle are hoping to bring out several expansion modules in which you can move your character and key objects from one game to the next.

Heavy On The Magick is a highly original, well presented game which will keep you quiet for ages. My only complaint is that the spells don't work in real life, although they are rumours that the editor has horns and a pointed tail!

Heavy On The Magick is available on the Spectrum with 128 Spectrum, C64 and Amstrad versions coming soon.

Heavy On The Magick

A highly original, well presented game which will keep you quiet for ages.