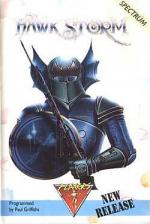 "Hawk Storm - last warrior hope of the planet Edos. Many moons ago, the evil Neviks stole the Capacitoid Crystals that were all that stood between the Edosians and destruction. All the Edosians have gone into suspended animation apart from Hawk Storm who must retrieve the 32 missing crystals to save his people."

Sounds familiar? Probably because it's the plot to this game. It's a scrolling runaround- the-landscape-and-collect-the-various objects game, but it's one of the most beautifully crafted collect-and-shoot- 'em-ups I've seen in a long while, which is a jolly good thing for a new-release budget. It's colourful, it's fast, and it's challenging without being too difficult. You must avoid various Nevik soldiers, firepits, slimeballs (what these look like is anybody's guess), spikes and gun turrets (shaped like death-spitting llama skulls) or simply blast the bytes out of them - if you have a gun. Your first priority is to get one and your second is to make sure it's decent (there are 3 different death-dealing pistols). Not only that, but you can also collect 3 different special weapons - shields, mines and stryders (a bit like swishing a sword your own length again back and forth) - to make life for the enemy a real misery, not to mention extremely unlikely. Once you'vbe built up a decent armoury of death, then you can go crystal hunting - and good luck! There are also such things as lifts, enenmy pods, electric barriers and teleports to deal with, so you'll have your work cut out.

On the minus side, the scrolling is very jerky, and the program won't allow you to jump on the lifts. Still, it's a small price to pay for something as refreshing, complex and enjoyable as this.

The scrolling is jerky, but it's a small price to pay for something as refreshing, complex and enjoyable as this.