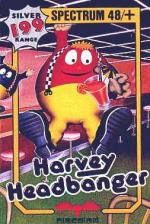 Actually, I've always preferred a good Harvey Wallbanger... Still, the cock and bull story about cocktails at the heart of this game is enough to warm the cockles of my liver!

This original concoction costs less than something cool and colourful in a glass, but will it leave you shaken or stirred? It's played on a grid where Harvey and Hamish Highball hang around - and even swing around - on bars. Their aim is to run rings round each other.

The secret of all this circling is that even if Banana Daquiris don't grow on trees, Singapore Slings spring up whenever the path of one of our two imbibers encompasses an area. If one player traps the other amidst the emerging cocktails, he forces a taste of his medicine down his opponents throat, which proves fatal. Never have two characters been so avid to avoid accepting a drink.

To add to the fun, all that time spent propping up the bar has taken its toll on Harvey and Hamish's waist-lines, and they positively bounce around. This can be distracting when you're trying to stay by the wall, but when the two collide it's real balloons-ville!

The battle that ensues leaves H and H reeling, with severe control problems. The only way to survive these encounters is a little oral anaesthetic of the alcoholic kind. Yes, drinking your own cocktails increases your resistance to pain.

It took a short while for me to get into headbanging with Harvey, but it's a game that's much simpler to play than to describe. Eventually your reactions become quite finely tuned to what your opponent's up to, and you work out the best manoeuvres to trap him.

As if that wasn't enough, there are options unlimited - one or two player games, changing computer opponent skill levels and even swopping characters during the game. You can play and play, and then play again.

Yes, I was getting happily inebriated on the thing, when Hiccup! - I crashed off my bar-stool and it crashed into Basic. But as it's so cheap I'll overlook it - just this once mind - as it should give you a happy hour or two, if your order's fast arcade strategy.

Should give you a happy hour or two, if your order's fast arcade strategy.