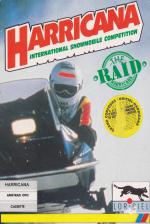 The sport of racing comes in many forms. Whether it's on foot, on horseback, or on a motor vehicle. People will take the chance to prove that they can run, ride or drive faster than everybody else. Even in Canada. [Er, pardon...? - Ed]

Cars would be a silly idea. For one thing, as well as 'dry' tyres and 'wet' tyres you'd have to have 'snow' tyres too. You'd probably need gallons of antifreeze as well.

So what they do in such snowy regions is race snowmobiles. These are far more suited to such colder climes, using skis and caterpillar tracks to keep a grip on the slippery surfaces, rather than four wheels which slide all over the place.

Harricana takes place in the frozen wastes of Canada. Twenty competitors battle it out in a race where man and machine are one, and need to work in perfect harmony to survive the gruelling journey.

The race is split into several stages. There are twelve in all, and in each the last competitor to complete the course is disqualified. Out of the twenty who start out, only nine will survive to attempt to win the final leg of the race.

There are two choices when it comes to the challenge. You can either keep to the course, or you could opt for the cross-country route. The latter option is unusual to say the least, as most racing games refuse to let you stray too far from the road. With Harricana, though, off-road racing is no problem - except that the terrain is filled with trees, fallen logs, and all manner of debris.

Your buggy is much faster than those of any of the competitors. You can burn them off no problem from the very start; the problem lies in keeping on course. The computer-controlled contestants can do this effortlessly, but it's not so easy for the human player, who doesn't know the lay of the land quite so well. The course markers are tiny. It's just far too easy to drift off course into the countryside and get lost before you know it!

The other danger is crashing. This is something that the automatic competitors never do. It's a pity that the same cannot be said of their human counterpart. The most annoying part is that, when you do crash, you have to reverse slowly away from the obstacle, and turn before continuing. This is a slow process, and seems to take an eternity. Of course, while you're performing this delicate manoeuvre, all the other vehicles have overtaken you and are well away.

In real life, a 60mph smash into a stationary tree would probably result in hospital, so it could be said that the slow recovery is getting off lightly. However, it does break up the action in what is otherwise a fast and extremely playable game.

The graphics are drawn in the Amstrad's four-colour mode. The definition is very high and there's a very atmospheric feel throughout the game. There are many humorous touches, too. The other competitors wear a variety of headgear, for example, while the crash sequences are wonderfully animated. A lot of work has gone into polishing this game.

Technically, Harricana is a fine game. The scrolling and speed are excellent, better than most racing games of this type. The problems of not being able to compete properly and fairly against the computer spoils it, though.

Time should teach you to master the controls. And if you can gain the ability to judge the twists and turns of the course with split second accuracy, then Harricana could prove to be quite a game. If not, then you'll soon become rather frustrated by the whole thing.

It's quite simple to look at, without much variety in the gameplay, but I loved it! It's atmospheric, humorous and very playable. The control is rather frustrating now and then, but overall, a great little game.

Atmospheric, humorous and very playable. Control is rather frustrating now and then, but overall, a great little game.