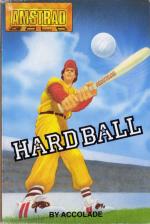 The last baseball simulation on the Amstrad was World Series Baseball, which unfortunately allowed you to run up cricket scores and was anything but realistic. Hardball, the latest from Amsoft - that house has been quiet for a long while - promises a lot more.

You have control over both the team manager's decisions about who plays and also over all the on-field action. You can play against the computer or another player and, as always with these things, a two-player game is the most exciting. Nevertheless the computer does put up excellent performances and won't be easily beaten.

The management side revolves around the various players statistics, which aren't very well explained in the instructions. Fans will know what they are; the novice should just worry about overall averages for each player. You can shuffle the team around using substitutes throughout a game. This is particularly important for the pitcher: you will probably need several, each one being good at a different type of pitch.

The screen where the pitcher and batter face each other is good. When the ball is thrown, you need good timing and reflexes to recognise the pitch and try to hit it. A hit will take you to an overview of the field, where the graphics are less impressive. All the usual baseball rules are implemented, including the option of a designated hitter and intentional walks. It's a much better effort than WSB was and should prove a popular sports simulation.

As far as sports simulations of this type go, this must be one of the most entertaining I have come across. Even though the graphics and sound are nothing special, it has a certain flair - playability. When first starting Hardball, it can be devilishly difficult, but a couple of hours swinging the bat will soon have you churning out the home runs.

Sensible choice of colours: all can be seen.

When first starting, it can be devilishly difficult, but a couple of hours swinging the bat will soon have you churning out the home runs.