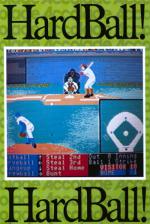 Is it true that every pitcher tells a story? Gordon Hamlett takes his place at first base.

To the uninitiated, baseball looks to be no more than a grown-up version of rounders and indeed, there are a lot of similarities between the two games. After the ball has been thrown (pitched), the batter tries to hit it and advance himself round the four posts (bases) in turn. Should he succeed in doing this, he scores one run for his side.

There are nine men on each team and the visiting side always bats first. A game consists of nine innings and each lasts until three men are out. If the scores are tied at the end of the nine innings, then there are extra innings until the match is resolved.

The batter must attempt to run at least first base whenever he hits the ball legitimately. A fair hit means that the ball must be hit in front of the foul lines. These are lines which extend from the batter to first and third base. Together with second and home bases, these form the diamond. The batter tries to advance round the diamond either through his own efforts or those of his colleagues. He does not have to stop at every base but must touch each one as he passes it.

No more than one batter can be on a particular base at any given time. The high spot in baseball is when the batter hits the ball right out of the playing area. This is called a home run and a "homer" is guaranteed to send the fans into fits of delight. What it means is that the batter and any other men already on the bases can walk around the rest of the bases and all score runs. So a home run is worth between one and four runs depending on how heavily the bases are packed with players.

Naturally, the non-batting side tries to stop all this happening. Their main weapon is the pitcher. Standing on a mound in the middle of the diamond, he throws the ball at the batter at speeds of up to 100 mph hoping to induce some sort of mistake. Each pitcher will have several different types of ball in his armoury. A fast ball is just plain fast and hopes to beat the batter by sheer speed. With curve balls, sinkers and the link, the ball actually bends to varying degrees in the air so that the batter misjudges its trajectory.

One other type of pitching is the old fashioned knuckle ball in which the ball is gripped in the knuckles rather than the fingers. Thrown this way, the ball's behaviour in the air is totally unpredictable.

A batter can be out in a variety of ways. He can be caught on the full as in cricket. He is out if the ball is thrown to first base before he gets there or if he is tagged by a fielder holding the ball when he is running from one base to another. Or he can be struck out.

The pitcher cannot throw the ball anywhere that he wants to. He is aming for an area between the batter's knees and shoulders and over the home plate. If the pitcher hits this target area and the batter misses, this is called a strike. Three strikes and a batter is out. It is also a strike if the batter swings at any ball, regardless of where it is going and misses it. It is also a strike when the batter hits the ball but a batter cannot be struck out this way (it only counts as a first or second strike, not a third).

If the pitcher pitches outside the strike zone and the batter does not aim a swing, that is called a ball. Four balls and the batter is allowed to walk to first base. It is possible to get two or more men out in the same play (unlike cricket where only one batsman can be run out).

Other terms you may encounter are stealing a base, which is where a batter who is already partway round the diamond tries to run to the next base even though the batter has failed to hit the ball, and bunting. This is where the batter, instead of taking an almighty swing at the ball, just taps it and runs. The object of this is to try and get as many men onto the bases as possible.

So, that in a nutshell is a brief idea of what baseball is about. It is not very complicated. It can't be if Americans play and understand it!

This is the game that US Gold didn't think could be done. Hardball was originally a baseball simulation for the C64 and the powers that be in Birmingham decided that it was not possible to convert it to the Spectrum. Advance Software disagreed, signed up the rights and... here it is. And every bit as good as the original it is too.

The game starts with you selecting your team. You are presented with a starting line up but can swap the batting order and substitute players as you see fit. As is typical with all American sports, there is an obsession with statistics and you are presented with a plethora of seemingly meaningless numbers, all of which give some average of other designed to show exactly how good, or bad, a particular player is. My advice, if you don't know very much about the game, is to ignore it all to start with. It is fun to play about with the statistics if you want to but you won't lose any enjoyment if you forget about them totally.

The main screen depicts the confrontation between pitcher and batter. Which man you control depends, not surprisingly on whether you are pitching or batting. Control of your character (keyboard or joystick) is determined from a series of options displayed at the top of the screen. Starting with the pitcher, he has four different types of ball available to him and your first job is to select which one of these you are going to throw. Each pitcher in your squad has different abilities and these might include fastballs, sinkers, sliders, curve and screwballs. You must then decide whereabouts you are going to aim - high, low, left, right or straight. Don't fall into the trap of chickening out and throwing everything straight as you will find any curving ball going way out of the striking zone.

That is all you have to do as pitcher. What happens next depends on what the batter does. If he misses or is out, the details of the innings are updated (strikes, balls and outs) and you move onto the next pitch. If the batter hits the ball, the action switches to a second screen depicting the whole playing area. Control changes to the fielder nearest the ball (he flashes to let you know which one it is) and you try to manoeuvre him to (preferably) catch the ball or to pick it up. Once you have picked it up, you must decide which base to throw it to.

As batter, all you have to do is to press fire in order to take a swipe at the ball. True, you can also aim high, low, left and right but you have so little time to assess the path of the ball, it hardly seems worth the extra throught as by the time the old grey matter has told the arm to move the joystick up, the ball has long since passed. Much harder is deciding whether or not to hit the ball in the first place. Initially, the temptation is to swing at everything but you soon find yourself being struck out as you aim blows at balls round your toes that you could never have hit anyway.

Before you signal to the pitcher that you are ready to receive, you can also decide whether to steal a base or bunt. If you do hit the ball, the secondary screen appears again and you can decide if you want to advance any of your men over and above their normal running order.

The game continues like this until all nine innings have been completed and the match is over. You can change your line up throughout the game, substituting your pither when he gets tired although be warned, once you remove him from the line up, he is out for the rest of the game.

One of the nicest things about Hardball is that the computer plays a good, but not impossible, game. OK, you will probably lose at first but you will not be outclassed and the thrill of hitting your first home run is tremendous (in one rival baseball simulation, I lost my first match 64-0. I have not played that game since!). The animation is excellent, and you don't have to be a baseball fan to enjoy the game although I suspect that as a lot of people will have been watching the World Series on Channel 4 recently, they will be itching to have a go.