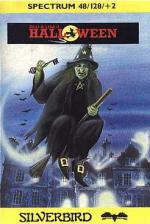 Scandi band Aqua once sang "Halloween... In the dead of the night, hear me scream!" Perhaps they'd just loaded up a very boring Spectrum platformer...

With the fabled Halloween night almost upon us, and wondering what retro game I might play on such an evening, I searched for the obvious (Halloween) and found a hit, a little-known graphic adventure, the second in the Olli & Lissa series. Released on the 19th September 1987, just in time for scary season, it was released for the Spectrum 48K/128K only and the only magazine that seemed to even acknowledge its existence was C&VG.

The instructions are, in the main, absolute tosh. Firstly, they explain to you that you're in control of Arabella, a "fairy on a broom". Ahem, since when do we associate fairies with Halloween and since when do fairies ride brooms? Arabella's a witch, and the instructions can't even get that right! Secondly, the Olli & Lissa connection is at best tenuous and at worst an absolute con. These cartoon characters are secondary characters who, every now and then, appear in a random cutscene in which they enthusiastically jump up and down for no reason at all...!

The next point is a major omission from the instructions. The game has redefinable keys, but it also has a gravity toggle control. SHIFT, in combination with M or N changes the control of Arabella significantly. I found the default gravity setting made the game very awkward to play, so anyone who simply ploughs into the game without knowing of this undocumented toggle is probably going to get pretty vexed pretty quickly.

As for the game itself, well, it's a very odd affair indeed. You fly around a mansion, avoiding the nasties who teleport into each room, and must do the following actions in strict order: (a) collect a magic wand, (b) find one of the sixteen items that exist, (c) get it by pressing fire whilst flying next to it, (d) collect another magic wand, (e) find the same item (shaded to indicate that it's not really there but is the place that item actually belongs) and (f) press fire to replace the shaded version with the actual item.

That's it, and it's soooooo boring. The graphics are mediocre, the rooms are bare and uninteresting and the sound is wildly inappropriate. The opening riff (on the 128K Spectrum only) sounds like something you'd hear a German Oompah band belting out rather than the expected spooky Tubular Bells riff or similar.

I could go on, but you get the idea. There's no atmosphere here at all. The scariest thing about the game is just how bland it is. I mean, yes, it all works, and it's not buggy, but it's so unoriginal that you wonder why the programmer bothered. Probably because it was released as little more than a cash grab... "Hey, maybe little Eddie'll persuade his parents he needs a computer game for Halloween?"

It's a shame that this is so unenjoyable that I can't even recommend it for some Halloween retro fun. I guess next year I'll just go with my gut and load up the much better Cauldron II again.