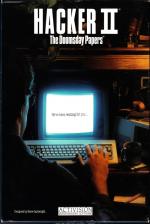 It's a year since bemused Zzap! reviewers opened and booted up a package which greeted them simply "Logon Please." Behind this anonymous introduction lay Steve Cartwright's highly original creation, Hacker. He's back with the sequel and this time it's on a much grander scale. Your greeting comes from the government of the United States. The plot is simple. After your exploits in the first game became noted, you achieved a reputation tor being an extremely skilled hacker. Now it is to be put to the test as the CIA have found a mission only you are capable of undertaking.

It's believed that secret documents called The Doomsday Papers are being held in a Siberian base. The documents detail a plan to undermine the American government and bring down capitalism in the West, paving the way for Communist expansion.

With the aid of three mobiles (similar to those used in the first adventure), you must explore the base and retrieve the plans. This should allow the CIA to implement preventative measures.

To complete the mission successfully, it is necessary to defeat a complex security system by avoiding or fooling a network of security cameras and personnel.

To do this, you have a device which can monitor four cameras, each with thirty eight channels. Video taping facilities exist so you can tape from a camera, and then bypass a camera with a recording, giving you time to manoeuvre without being spotted. The video recorder allows frame pause and preview functions for fine editing, which is essential since each recording has 'synch' numbers which must be correctly matched with live action to successfully fool the security system.

It's also possible to use one of the four monitor screens to display the area around the MRU (Mobile Remote Unit). This display allows you to start creating a map for exploration purposes. It reveals the whereabouts of any security officers in the area, active monitors and anything else you might have to worry about.

The manual is designed as if it referred to the real machinery involved in the game and as a result it is quite a mouthful to digest. However, it does cover all the functions used in the game in explicit detail and adds atmosphere.

The manual is actually supplied in an official-looking envelope and reflects the atmospheric nature of packaging. The screen controls are activated by a joystick-controlled hand that moves over the panel. Pressing the fire button makes a finger depress the button beneath. This is normally highlighted in a different colour. The animated graphics are black on grey sequences to give the effect of monochrome monitors. The screen borders flicker when you come under attack.

One particularly nasty weapon employed by the enemy is called the annihilator. This can be called in at any time. A kind of anti-robot robot, it hunts down and kills MRUs. Unlike Hacker, you have three 'lives' in the form of MRUs. Because of the distinct plot, this sequel is not a series of repetitive actions needed to build up a picture, but rather constant exploration and deception procedures with many subtle differences.

The sheer scope of the game should provide plenty of challenge and it would seem necessary to devote hours of work to solving the game. It is also a very strong hybrid in that it plays like an adventure more than an arcade game but relies on graphics of a superior quality to arcade adventures.

The start of this game is quite a departure from the simplistic "Logon" message which greeted you when the original Hacker was booted up. This one churns out all sorts of Government bumph, but is just as stunning nevertheless.

The game itself is superb and the video system totally convincing - I spent half an hour fiddling about with it without even bothering with the game! The game's objective is quite a simple one (if rather right-wing and repellent) but actually achieving it is far from easy! The instruction manual is good, though, and certainly needs to be read thoroughly, otherwise you don't stand a chance. The graphics are brilliant and the sound effects atmospheric and very functional. In fact, the only thing I didn't like about this game was the political implication of the plot. Still, Hacker II is a brilliant game and one which I can heartily recommend to anyone who fancies becoming a super hacker.

I'm in two minds about this game. Yes, it looks very competent and is fun for an hour or so - especially fiddling with the video screens - but I doubt will ever come back to it. I found the original Hacker far more intense and enjoyable to play than this.

Even though Steve Cartwright has come up with yet another stunningly original game, I would have reservations in recommending Hacker II to fans of the original, and would urge you to look before you leap - you will no doubt be impressed by the special effects, but you may well be disappointed with the actual game.

I fell in love with the original version and the sequel is dramatic enough to get me excited again. Certainly, from a technical point of view, the game is a masterpiece. The video effects are extremely realistic, right down to the appearance of noise bars during pause and preview modes. What I don't like about this game is the lack of real atmosphere.

You get a very self-indulgent manual - so much so that it takes some understanding and a 'message from the government', but gone is the terrifying simplicity and ambiguity that made the first game a midnight classic. Hacker II is an impressive game in every respect. But, in being dramatic, it's lost the subtlety of the original. It will probably be another big success for Activision, and despite the fact that the game isn't as appealing, it's still an extraordinarily original example of Steve Cartwright's talent.

It's also an incredibly difficult game. How long people will play before they become bored is another question. Like others of its type though, Hacker II will establish for itself a loyal cult of followers forever caught up in a hidden world of techno-spying.

Presentation 86%
Very impressive, although the manual is so verbose it does take time to figure out what does what.

Graphics 90%
The graphics are largely neat rather than astounding and feature some remarkable animation effects best seen in the video sequences.

Sound 69%
Reasonably good, although nothing worth lubricating your lobes for.

Hookability 81%
Intriguing but demanding right from the word go. Some will get immediately buried under maps while others will bury the game itself.

Lastabillity 89%
Given the apparent flexibility of play, it looks as though a fair amount of midnight oil could get burned in this one.

Value For Money 87%
An impressively packaged game for the price.

Overall 88%
A very clever sequel but, as with all sequels, the magic has faded.

A very clever sequel but, as with all sequels, the magic has faded.