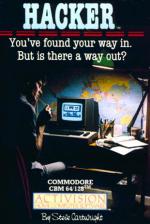 Nobody in today's computer press would ever advocate breaking into a mainframe system to fiddle around inside. Cases of such things happening have made front-page news before now. So it was all the more exciting when Activision announced that they would be creating a game based on exactly this situation. 'It'll be just like the real thing,' they said. The final creation is definitely worth the wait for anyone who has ever been curious about what could happen.

The game loads turbo-fashion, which is no bad thing nowadays, and you're not going to be kept waiting forever to see what goes on in this twilight world. When the load ends, you are presented with a blue screen and the phrase, 'Logon.' Obviously they decided to throw you right in at the deep end! All you can do is attempt to guess the password that lets you into the game. The only help you may get is a prompt which 'reminds' you that the password has been changed and it is the location of the current test site - wherever and whatever that may be. If, after a few attempts, you fail to succeed in this rather difficult task, as you most probably will, the system decides you shouldn't really be around and begins the termination sequence.

When you get to this point, don't despair and turn your machine off - it's only the beginning. What follows is a simulated system crash and a 'security malfunction' which, as you may have guessed, lets you in one stage further.

At this point in the game you are still totally ignorant of what is supposed to be going on; a feature more typical of classic Infocom adventures than Activision games. The computer then draws a schematic of something called a Subterranean Remote Unit (or SRU for short). It begins doing a systems check on this particular unit and asks you to designate certain areas to be examined. You have to continue working through this section until you understand what each device is. This should not take more than a few minutes, as there are only five things you need to identify. Once the vehicle is confirmed as being operative, you are taken to the next stage of the game.

A world map, overprinted with a grid network appears at the bottom part of the screen and an information window fills the top half. You are asked your name. There is no trick here and you may reply with any name you like. The computer then asks you to set up whichever time zone you are in. The world map has night and day areas defined in it and you may alter these with the joystick so that the display matches your time zone (a clever feature which we will come back to). Finally you are informed that your SRU is situated in the South Atlantic and the display changes again.

The map now shows your present position on the grid and highlights some major cities across the world. However the top part of the screen is split into three sections. On the left are a series of keyed input options which are highlighted when used. In the middle is the actual view from your SRU and on the right is a compass (to allow you to verify your present heading) and a small message window. This is where the game really gets going. Almost straight away the message sign starts to flash, and on accessing the message you uncover the purpose of your mission.

The computer you have inadvertently broken into, belongs to a company called Magma Ltd. They have some kind of secret project being undertaken and you have arrived right when things are hotting up. Someone has stolen one of their secret documents and it is now in segments all over the world. Your mission (now you're here) is to uncover the pieces from the various cities and return them to base. Here lies the first of many problems. Various international spies are in possession of these pieces, and they are not ready to just give them away. They each want something that another spy already has - but you have no way of telling what. You might supply an agent with an item which allows you to take the segment from him but later on you may realise that the item was necessary for a different spy, and by then it's too late! To cap it all, there's a time limit on the whole affair so you cannot spend forever on all the possibilities.

To think, however, that your problems should end there, would not be too unreasonable - but they don't. The tunnel network in the grid is far from perfect and there are rarely direct routes to anywhere. The catch is, it looks as if there are routes everywhere. It can take forever just to find out how to get from A to B.

Once you get to a city you can leave the underground system and reach the surface. If it is nighttime, you won't be able to see anything on your viewing screen unless you activate your infrared sensors. You can then examine a panoramic view of whichever city you are in.

At this point you may attempt to call the local agent in order to parley with him. Each agent speaks in his natural language (don't worry, you get what they're talking about from the context). As was mentioned earlier, these agents are only bothered with what they can get from you and for the first few times, you may get their piece of document, but you might unintentionally put yourself in a bad position at the same time.

Back you go into the tunnel system to finish your quest. During your travels, you eventually get a message which lets you know that Magma Ltd are aware of the security breach you have caused. From this point on, the company send out satellites to find you. Every time they pass close by, they carry out a security check on you. Each one is harder than the last and unless you made notes early on in the game, you're going to be in trouble. If you fail to answer the security check questions, you are thrown out of the system. Eventually, security asks you where the test site is. This is the same as the log on code and is therefore as far as many people can get for the first few games. However, if you are successful enough before this point, you may find out that cryptic piece of information. Once it's in your possession, you can log on for future games without going through all the preliminary features.

Finally, when you have the document intact (you see it building up each time you obtain part of it), it must be taken to a particular agent if you are to succeed. That last part is harder than it sounds...

Hacker could be classed an arcade adventure in as much as System 15000 was classed an adventure. As with System 15000, there an excellent atmosphere is generated, making the game incredibly absorbing to play. Both graphics and sound work extremely well, adding to the overall effect. This is an unusual game that provides many hours of harmless happy hacking and it's all done in the best possible taste.

This is an odd sort of game, and is a cross between an adventure, a strategy and an arcade game all combining to make a thoroughly enjoyable program. Getting into the game isn't as hard as it first seems, but once you're in it takes quite a lot to stay there (it certainly helps if you take notes all the way through). The graphics are pretty good, with some excellent touches when you zoom about in your underground vehicle and the spies are very well animated and look dead shifty. Hacker is a highly original program and I'd recommend it to someone who wants to give his (or her) grey matter a workout while playing a game for once.

Everybody who saw the opening was impressed with it. It's simple, original, atmospheric and superbly executed. Hacker gets off to an excellent start! The graphics all the way through are very smooth and colourful. The soundtrack is very simple but adds tremendous atmosphere. If you were playing this game in a darkly lit room at night, it would be totally captivating. The game isn't fast visually, but nevertheless the pace builds up a sense of urgency which is definitely in character. There aren't any glitches (that we found) so the overall impression is one of brilliant professionalism, which is what should be expected from Activision. There are some really good features, for instance in the way that if you enter a city at night using infra red, the graphics are all drawn in shades of red - simple but extremity effective! Because of the unusual nature of Hacker, it may not appeal to some tastes, so it would be rash to recommend it out of hand. Still, there is no doubt that the game is a classic with qualities that few others can aspire to.

Presentation 91%
Deliberately no instructions, but this is the nature of the game and adds to the thrill.

Sound 68%
Atmospheric, but little of it.

Hookability 88%
Sets the adrenalin going from your very first 'logon'.

Lastability 84%
A sufficiently complex game that is also involving.

Value For Money 83%
The going rate for a good game.

Overall 87%
Exciting and unusual approach to the arcade adventure genre.

An exciting and unusual approach to the arcade adventure genre and a sufficiently complex game that is also involving.