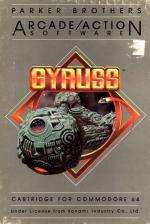 Gyruss is taken under license from the arcade original by Konami and it is superbly translated for the C64. You must go where no man has gone before, from Neptune to Earth, in warp stages. You craft runs in a circle around the perimeter of the screen and aliens attack from all angles as you mercilessly zap them.

There are a number of warps to get to each planet, two warps to Neptune and three warps to all other planets leading to Earth.

Each warp brings you into battle with four different formations of enemy fighters. If all the aliens are destroyed in a formation, a bonus is given rising from 500 to 2,500 for the fourth formation in a warp stage. There is a chance stage also where bonus points are given for destroying the planes in formation.

Other dangers come in the form of meteors and runaway satellites which lose you one of your five ships on contact. A bonus ship is awarded at 60,000 and 140,000 points (not 160,000 as laid out in the instructions).

Gyruss is the finest shoot-'em-up I've come across in a long time. It sticks closely to the fine presentation of the arcade original and is really playable.

There's also musical accompaniment from Bach's Toccata and Fugue in D minor. Graphics are really excellent with colourful, well-defined aliens spiralling out from the centre of the screen.

Other Commodore 64 Game Reviews By TT

Graphics are really excellent with colourful, well-defined aliens spiralling out from the centre of the screen.