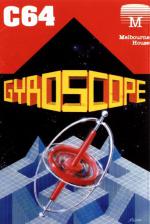 Whoever wrote Gyroscope was very heavily "influenced" by Marble Mardness. The games are not the same, but the differences only go to emphasize the similarities. For those of you who haven't seen Marble Madness before, here is a quick resume.

You control a Gyroscope that has to traverse a 3D landscape of hills, narrow ledges, holes, bridges, etc; falling off any of them resulting in your "death". Also to hinder you there are aliens roaming around, lumps of glass and directional magnets to drag you off course.

The game is played over the diagonals, which makes the joystick a bit awkward to use, but no more so than keyboard I suppose. The original game was designed for a trackball, and I think that this is where the game will show its true colours.

Added to all this is a time limit; after which your gyroscope just runs down. Music also plays in the background and adds to the atmosphere of the game.

An extremely good adaptation of a game that I thought would never end up on the small screen.

An extremely good adaptation of a game that I thought would never end up on the small screen.