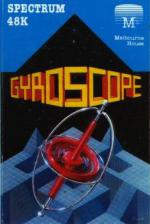 I remember owning one of these devices - you spun the wheel inside the frame and as long as it whirled fast enough or didn't hit anything, it would balance upright on virtually anything, a piece of string, a pencil point, or follow a ramp of books.

Why I mention this is because Melbourne House has created a program in which the movement of their gyroscope is incredibly accurate when compared to the real thing!

With some similarities to Marble Madness, now a hit in the arcades, you have to steer this awkward object down five maze-like ramps, each extending over four screens; these are beautifully created in solid 3D perspective and have walls and pits to crash into. As if that is not hard enough, there are steep slopes, slippery glass patches, directional magnets, aliens and narrow ledges to contend with. Oh, and you are racing against the clock, but at least you get seven lives with extra ones for every 1,000 points.

I played this game for far longer than I could really spare for the review and found gentle nudging of the joystick (or keys) gave me the most control. Another tip - don't let the gyroscope build up too much speed. I completed the first screen after a few plays but only completed the second screen once, and after many attempts a tearing of the hair program.

A mention here of the sound. I am sure they must have used their "Wham" program, because it is without doubt one of the most impressive bits of music I have heard so far.

Brilliant. One of the state of the art programs awarded our rare six star award.

Brilliant. One of the state of the art programs awarded our rare six star award.