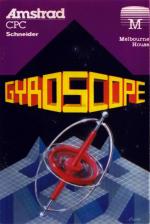 As far as home computers are concerned, this is a stunningly original game, featuring a tough-to-control gyroscope on its perilous journey through 28 devilish screens. It's based on an arcade game called Marble Madness but, like all such limitations, doesn't quite match up to the original.

The game takes place against a futuristic and abstract group of 28 screens which have to be negotiated by a gyroscope. The gyro spins on an axis and purely with joystick or key action can be moved in all directions, it spins upon a smooth surface divided up into squares, giving the whole scene a geometric look. The landscape is contoured by slopes, towers, shadows, canyons and ledges that give each screen a very attractive design.

The task facing your spinning scope is to get to the bottom of the 28 screen course which is composed of seven sections, four screens in each. The sections have to be completed within a 60 second time limit by reaching a large green square on the fourth screen. Points are scored for each new screen visited and as a bonus for the time left at the end of a stage.

The trouble with gyroscopes is that they have the annoying habit of running into, or off, things and falling over. You are only allowed seven lives and one of these is lost every time you fall over or run out of time but another is added for every thousand points scored.

Many obstacles stand in your way and each one presents a particular problem. Narrow ledges call for very tight control, which is far from easy with a machine that suffers from inertia. Many sections have to be steered round very slowly and one wrong twitch on the joystick may send you crashing off the course. Control in these situations is initially extremely difficult but as you get used to it it becomes a finely balanced challenge to test your joystick skills. Keyboard players may find things harder but it will certainly sharpen up the reactions.

Control becomes even harder on some patches of ground that are made up of slippery glass, steep slopes and magnets. Glass disables your controls as the gyro skids across it, possibly to its doom. Steep slopes accelerate you down them and sometimes at angles and can also throw the gyro to an early grave. Magnets are really nasty and can disorientate the controls and bounce you about all over the place. Some screens even have large areas of open space with an odd buoyancy effect on the gyro.

The most difficult hazard are the aliens that inhabit some screens. They move around in general zones but within that area their actions are random so that getting past them can be a real pain in the gyro. They seem to hit you unfairly sometimes when you get close to them and it can be enormously frustrating after mastering the technique of control, only to find an infuriatingly random hazard.

As you move from one screen to the next, the display scrolls jerkily to reveal the new area and although the screens look good there isn't much animation. The musical accompaniment is full of variations on a theme but unfortunately this goes off-key in places. The most annoying feature is the "dissolving" title screen as you start a game. It takes several seconds and serves no obvious use.

Plenty of marks for originality and gameplay and as ever it's a very slick package from Melbourne House. The minor niggles can become very annoying in this sort of frustration game but I was left wanting even more and varied screens. A great game that could be just that bit better.

On my first go I thought the control in this game was going to be so awkward that I'd just leave it alone. But I found myself having another go, and then another and then... It really is very addictive. It's also very tough and will demand a lot of anyone who plays it, even if they are joystick maestros. A very smooth and impressive game.

N. Little animation, bad scrolling and imprecise alien collision spoil the graphics.
N. May be too frustrating if you don't like the control.

A great game that could be just that bit better.