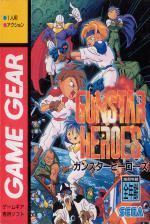 The Game Gear's days might be numbered, but there seems to be no shortage of quality titles appearing for the little grey box, even if they aren't all appearing on these shores. Gunstar Heroes stretches the mini-console pretty far by packing at least the flavour, if not the full breadth, of the shoot-'em-up onto a mere 4 Meg of handheld fun.

Drawing a veil over the incomprehensible and lengthy intro sequence, you're basically armed to the teeth by Japanese pixie-type wizards and sent on a killfest across everything from Mexican pyramids to the deck of a destroyer and some rather cute treehouses. Destroy everything in your path, especially the ridiculously-muscular Rambo types in their colourful Third Reich style get-up. There's not much else to it really, but needless to say, finding ever more inventive ways to kill ever more varied bad guys should keep you amused for quite a while.

Gunstar Heroes is literally littered with maniacal nutters at every turn, just waiting for the opportunity to blow you away. They can take the form of animated pyramid blocks, Transformer-style robots and mad Nazi generals so don't stay still for too long - you'll probably be standing on one of them.

Perhaps the most bizarre boss in the entire game is this fire-breathing asparagus who sprays you with 'balloon bombs'. Dodge the bombs and stand underneath the plant so you can plug away at its 'head'. Then add butter and serve.

This feller's a giant version of one of the hovering US marines that chases you on the second level. He's especially difficult to kill thanks to his knack of being able to walk across ceilings so you'll have to hover around to stay on target.

The third level is riddled with many navigational puzzles (some of them of a decidedly nautical nature) and bonkers blokes like this jackbooted general. Ignore his frenzied jumping up and down and put him out of everyone's misery.

This 'robot in disguise' is so efficiently armour-plated that only direct hits in certain areas will bring him down. Keep a steady height as best you can and keep plugging away until he folds back into a lorry or something.

I don't know, one minute you're running along the top of a pyramid, next thing you know the pyramid's come alive and it's running all over the top of you. Sometimes you just can't win, can you?

Playing Gunstar Heroes is a bit like joining the army - you travel the world, meet interesting people and get to kill them. Dank forests, balmy desert pyramids, underground wells and dark underground tunnels all bear witness to your decidedly cavalier gunplay.

The original Megadrive Gunstar Heroes was an underated classic, so I had high hopes for a similarly impressive Game Gear version. The graphics are remarkably similar to the original considering the machine's limitations. The action only really lets up when there's too much going on and enemies become lost in the background, though this is a minor irritation that disappears when you get engrossed in all the diverse levels.

All the original bosses have made the transition and the Game Gear copes well trying to emulate the weird and wobbly effects that made the Megadrive game so appealing.

This is a neat little shoot-'em-up that has survived the scaling down process remarkably well. Well worth tracking down a copy if you can.

Gunstar Heroes passed me by on the SNES and Megadrive, but its reputation as a criminally undervalued title certainly didn't escape me here in the office.

While the Game Gear version has apparently undergone something of a visual overhaul, the sprites remain true to the original version, and the gameplay is so fast and furious that it seems to burst out of the hand-held machine's tiny screen.

The most positive thing about this is the sheer variety in the gameplay - not only can you move around the game in almost any way imaginable, you can choose the snazzy weapon of your fancy and use it across a large number of diverse scenarios.

This isn't going to win any prizes for pushing back the frontiers of game development, but it does the business in fine style.

Animation 81%
P. Again, the bosses are the most impressive thing. Elsewhere, animation scores when the game is at its most frenzied.

Effects 60%
P. Some fuzzy crunches complement the action when it's at its busiest.

Playability 84%
P. Stretches the 'kill everything' format about as far as it can go on this platform.
N. It's perhaps a bit too difficult.

Lastability 85%
P. Diverse scenarios, lots of levels and varied enemies.
N. It's not a radical enough twist to convince those who dislike the genre.

Overall 85%
Few surprises here, but a broad and varied shoot-'em-up with real lastability.