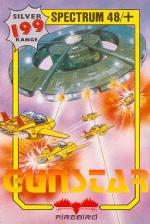 Tune up those trigger fingers, folks, 'cos here comes some frantic arcade action from Firebird that'll lead to adrenalin overdoses nationwide! Fast and furious aliens flying at you at a rats of knots are what you're up against, though the plot's all too familiar. Earth has been colonised by unknown aliens (again!) From your secret moonbase, you and your comrades, Pulse fighters of the Gunstar fleet, must liberate the planet.

You have to battle through five screens to do it, though. First, zap the aliens while avoiding their fire - easy peasy, this, 'cos they fire dead slow and you've got high speed lateral, fore and aft movement. Then you've got to avoid the asteroids before spiking the guns of the alien command ship. That only leaves you the ALLOY robot's turrets to tackle before the menacing manoeuvre of docking with the mothership.

On screen you'll find your three lives and your running points total - this turns into a cowering astronaut each time you bets the dust. You also see your temperature and fuel levels. It's no use trying to hide in a quiet corner of the screen - your fuel level'll drop to nothing and you'll be a goner.

What Gunstar lacks in subtlety, it more than makes up for in high speed action and good graphics, that're wittily presented. It's a great way to earn your cosmic wings and reach for the stars at an unastronomical price!

What Gunstar lacks in subtlety, it more than makes up for in high speed action and good graphics, that're wittily presented.