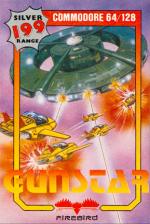 Guess who's in trouble yet again? Yes, it's the earth's population.

Us peace-loving Terrans have been set upon by unknown (but presumably nasty) aliens, and the people of our beloved planet are on the brink of extermination.

Fortunately for mankind, a secret lunar research team have developed a fleet of Pulse Fighters; short-range attack craft which could helpp turn the tables on Earth's aggressors.

Each member of this newly formed 'Gunstar' fleet negotiates five different sections in his mission to defeat the aliens.

Firstly, an alien attack wave has to be defeated in combat - blasting their ships while attempting to avoid returning fire. Having obliterated these, an asteroid belt has to be dodged, which leads directly to the alien command ship. There are several styles of command ship, each one having several laser turrets, spitting fiery death. Successfully blasting the turrets causes the ship to disintegrate and allows an assault on the ALLOY robot - mainstay of the alien forces.

Having destroyed the robot, the battle sequence is repeated from the beginning.

If your ship is destroyed at any time during the onslaught, you are transported back to the mothership ready to begin the battle once more, starting with the alien fighters again.

There have been so many high quality budget shoot-'em-ups released recently, that I suppose it's almost inevitable that a grotty one should appear.

What makes this so awful is that there are only five very limited levels to blast through, and the only thing that makes completing them difficult is the fact that you have to go all the way back to the first stage every time the rocket is destroyed.

The graphics are completely uninspiring and reflect the action perfectly. Avoid it.

I can't believe how simple Gunstar is! Surely the programmers could have thought up something a bit more taxing.

The graphics show little imagination and create no atmosphere. Collision detection is a bit suspect, but the quick responses just about cover the inaccuracy. The intermission screens are well presented but get very boring very quickly.

Gunstar is totally boring and unaddictive. You'd have to be pretty unexciting to enjoy a game of this shallow level.

Gunstar represents quite a good bit of fun - for a while. You can blast and dodge and blast again and generally have a good time. Eventually though, the fact that losing a life sends you straight back to the beginning, no matter how far you get, soon proves very annoying indeed.

It then seems rather pointless to give you three lives. Having said that, it certainly won't take long before you can defeat all five levels, and once you are familiar with them all, the urge to return will probably be non-existent.

Presentation 51%
Decent on-screen presentation, greatly marred by the need to start from scratch on losing a life.

Graphics 55%
An odd mixture of Spectrumesque sprites and bas-relief graphics.

Hookability 62%
Simple blasting to start you off...

Lastability 28%
...and then you realise that the little you see is all you get.

Overall 38%
An archaic concept and a poor game structure.

An archaic concept and a poor game structure.