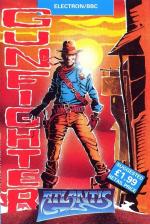 When the Acorn Electron had long since gone out of fashion and even the Acorn Press had moved on to reviewing games for the Master Compact and Archimedes machines, a little-known software house called Atlantis released a slew of budget games. I remember as a teenager being quite surprised to see them as, by the time they appeared, it was the era of the Sega Mega Drive and the Amiga. Cassette-based games were already feeling a bit "old". Still, here they were, and in quite snazzy-looking packaging too. Gunfighter is particularly handsome.

It's the story of a ghost town "out west". The town has been overrun by outlaws, and its inhabitants have become so scared that they have all hidden under the floorboards. Not, however, before they called for assistance in the form of the local gunfighter/sheriff (It's not altogether clear which one you are!). So, here you are in an eerily deserted town, with a six shooter and a two pronged mission. Prong one: find all the "deeds" to the town. Prong two: shoot all the outlaws you meet.

Rather unusually, Gunfighter is a flick-screen graphic adventure. But it's not of the type that will have you exercising your brain. You don't have to collect things in one place to use them somewhere else. Quite the contrary, in fact. It's a very simple game indeed; basically just an exploration game with the odd bit of shooting, and a few bonuses flung in for good measure.

All the action takes place in the central panel of the screen, which is a fair size and done in the Electron's four-colour mode. You can move left, right, up and down and, when you need to, you can shoot in the direction you're facing. At the bottom of the screen is a message board onto which flash warnings ("Hugo Yorway is in town. Watch out, cowboy!") or information ("Two Feathers Tumo is outside the Doc's"). On the left, a little panel in the form of a wanted poster shows the bandit's face too, which is a nice touch. Rewards for dead outlaws steadily increase in 11 point increments.

A screen takes very little time to traverse and the game powers along at a fair old speed. There are distractions in the form of a Casino (in which you always seem to lose, so don't bother), the Doc's (where you can buy an additional life for $500) and the Sheriff's (where you'll find your ammunition gets replenished).

When you meet an outlaw, he will start shooting at you on sight and the game can be extremely unfair when he just appears, seemingly out of nowhere. Making matters worse, if you are shot, you reincarnate in the precise spot you fell. I thought repeating death-loops went out with Jet Set Willy but apparently not.

The big problem with Gunfighter isn't its graphics (nice, handdrawn and colourful), or its (responsive) gameplay. It's just so darn boring to play. If the fifteen deeds were scattered about randomly at the commencement of each game, I think collecting them up might pose a good challenge. Unfortunately, only a single deed is waiting to be found - and it could be anywhere on the rather large map. When you find it, you get a message ("You've found a deed! Find 14 more to save the town!") and another deed is placed somewhere on the map. This leads to long treks to the same locations over and over again.

Fighting any outlaws you may meet en route proves a distraction, but the game feels more like one long collect-'em-up rather than a comedy western, which seems to have been what it was aiming for. That's not to say it's bad, but it's largely unchallenging and you're likely to turn it off after you (correctly) conclude that there's nothing more to it than that.

At only £2 back in the day, it wasn't a bad buy, certainly a lot better than some of the Alternative Software tat that retailed for 50% more. I do wonder, actually, how well it sold though. Not only was the market small by 1990, but this game had no publicity at all. No adverts, no reviews, nothing. Still, I saw a heck of a lot of Atlantis games for sale in quite a few high street stores - Boots, WHSmith and my local independent computer store all had them. They were the breathless last gasp of the 8-bits... So no wonder Atlantis went to town on the cover, I suppose.

If you like the look of Gunfighter, a cassette version will, if you can find it, probably sell for £3-£10.