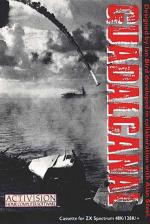 Guadalcanal Island marked the southernmost limit of the Japanese advance in the Pacific, where both sides suffered mega-losses in men and warships as they struggled for supremacy on and around this vital island. Fortunately, the US and its allies were better able than the Japanese to cope with the devastation and Guadalcanal was finally won by the US.

Such is the scenario of Activision's latest strategy game Guadalcanal, a one-player game in which you command either the US or Japanese forces on land, on sea and in the air, using an icon-based control system.

Presentation is first-class. The manual is concise, clear, full of helpful detail and info - just what you would hope a manual would be like. The screen graphics are among the best we have seen. They give you all the information you need about what's going on out there. The top half of the screen shows a large-scale Strategic Map of the whole battle area. Above this is a row of 10 control icons, a digital dock with date, an analogue clock (i.e. one with hands), a time-of-day indicator (dawn, daytime, dusk and night), and a flag to show which side you are commanding.

The lower half of the screen shows a large-scale scrolling Battle Map on which you can identify the units in more detail. Further information is shown in an area to the right of this, where all control operations are handled. Across the very top of the screen you see incoming radio messages, keeping you up-to-date on events Pacific-wide. Plenty to look at, plenty to think about.

The manual says 'The clock NEVER stops,' which sounds ominous, but is nothing to worry about. Game time passes six times faster than real time but, as we are dealing mainly with warships ploughing (or should it be 'plowing' for the Yanks?) their way across miles and miles of Pacific, you'll have plenty of time to deal with everything.

If you want a quick shoot-out, this game is not for you. If you like to think, plan and reason, you will enjoy it. For example, supply is a very important feature of the game. Every item of supplies and all reinforcing troops have to be brought to the island by sea. Your supply ships must be kept busy or your gunners will soon have no ammo (or no guns), their morale will drop because of food shortages, and they will begin to die from malaria (which, at some stages of the real battle, was more deadly than the enemy).

This is a game with lots to think about - plenty of depth -but not enough width. By that we mean that there are not enough land and sea units to allow flexible and interesting strategies to be tried, and there is only one supply Task Force, which means long supply-less gaps while it returns to the supply ports to re-load. Pity we couldn't have had an enhanced 128K version!

Overall Guadalcanal is a game of really ingenious detailed simulation, and certainly captures the atmosphere of suspense as you send out your scouts and spotting planes to look for approaching enemy forces.

Disappointingly, it lacks the fury of a major WW2 conflict, which Guadalcanal most certainly was.

A really ingenious, detailed simulation... It certainly captures the atmosphere of suspense as you send out your scouts and spotting planes to look for approaching enemy forces. But it does lack the fury of a major WW2 conflict.