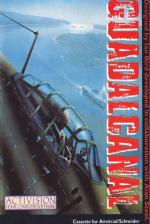 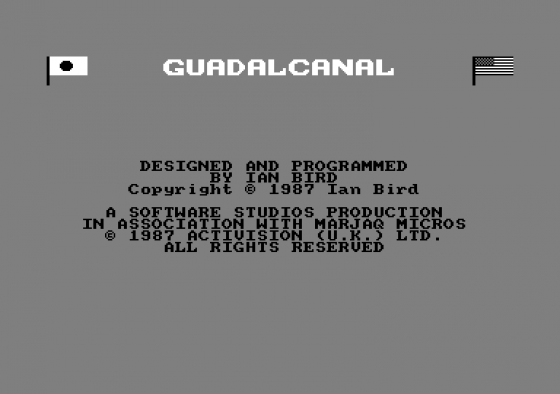 Guadalcanal is a Pacific island that was fought over by the Japanese and the Americans during 1942. A history of the battle is supplied in the detailed instruction manual that's supplied with the game.

There are three scenarios that you can play: a three day battle to get you used to the game, the full Guadalcanal campaign in which you control the USA, and the final one is the same campaign but you command the Japanese. The objective is to win the battle by destroying the enemy forces using your land, sea and air forces. This involves careful use of your fleets, planes and men or you will leave yourself open to counter attack.

Along the top of the screen is a row of ten icons. The map icon switches you between the map and icons. Other icons appear when you've selected a unit and they let you find out what condition your forces are in and allow you to order your troops to attack, withdraw, go home, etc. Next to the map icon is the clock winder, which rapidly forwards the time if things are going a little too slowly for you. Scouts can be sent out on missions to find out what the enemy are doing. Intelligence information is important in any battle and the ear icon is used for this purpose. 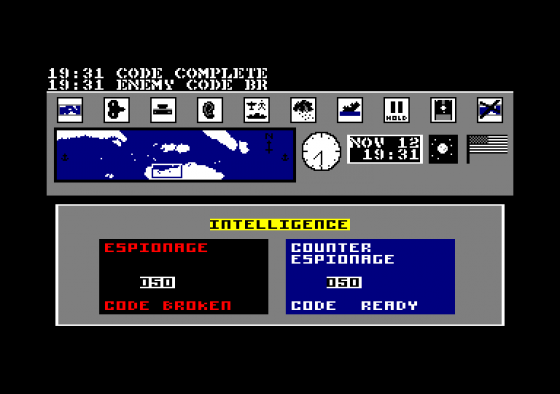 Weather plays an important role in war and a weather icon tells you what it's like outside. The status of your fleet and the number of losses can also be shown via icons. The last three icons allow you to pause the game, save it or quit it.

It's a little confusing at first as to what's going on, but you soon begin to get to grips with the game. The use of espionage and scouts adds to the action because to win you need to know what your enemy is doing. The feeling of dread when you suddenly discover a massive fleet approaching you gives the game atmosphere.

Sound is simple beeps, buzzes and pings. The icons are all large and easy to identify. The graphics are small and simple on the map, a bit more detail would have been nice. 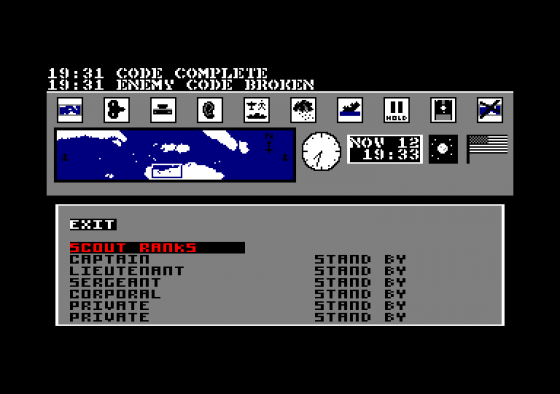 The manual is long and a good read through is recommended before you begin play. World War Two has had many of its battles put onto computer and this one is a good representation of the battle.

Win in scenario one.

Some of the units are a little difficult to identify in green.

Sonics 16% N. Sound could have been used more.

Grab Factor 64% P. A hefty manual gets you into the feel of the battle. N. A little tricky to understand at first.

Staying Power 72% P. Three scenarios to complete. P. Each of them is a challenge in itself.

Overall 69% One of the better wargames in recent months.

One of the better wargames in recent months... Three scenarios to complete, each a challenge in itself. 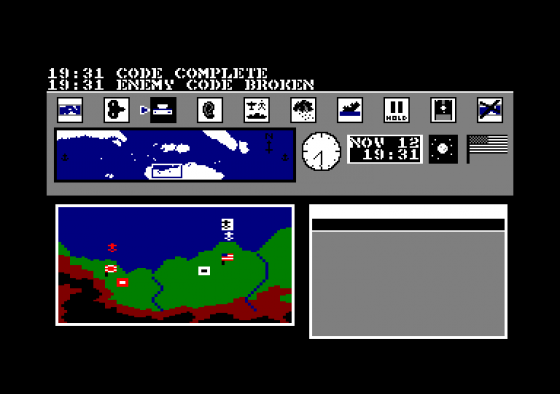