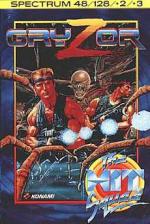 When you've just had your planet invaded and there's nothing you can do about it because of a bad cold, the risk of missing an episode of Home and Away, or a pressing dinner engagement at McDonalds, there's only one person you know you can turn to; Lance Gryzor, just about the toughest soldier the world has seen since John Wayne turned Vietnam into the wild west in "The Green Berets".

Like all real tough guys Gryzor is known only by his surname and anyone calling him anything else gets a Fifty Caliber salvo for their trouble. This is apparently what the invading alien Durrs have done, apart from threatening the entire eco-system of the planet by assembling an Atmosphere Processing Plant to control the weather, and Gryz's angrier than a pitbull terrier with a tick on it's bum and just rootin' for a fight.

To defeat these dastardly Durrs Gryzor must fight his way through five levels of combat hell armed with a vicious looking ping pong gun. Those not keen on table top sports will be delighted to know that this weapon can be upgraded by knocking off the various weapons installations you come across during the skirmish. The first level is horizontal scrolling and is challenging from the start. Duck and dive like Frank Bruno 'cos those enemy soldiers are fast and accurate, 'Arry. Don't be afraid of the water if things are getting tough because Lance is a good swimmer and life is a lot cooler down there.

The second and fourth levels consist of 3D Mazes and the object is to blast at anything that moves or looks remotely out of place. In both Mazes you must find the entrance to the next level and blow it and it guards away. There aren't as many obvious aliens to destroy as in the 2D sections but there are plenty of targets. The vertical scrolling platform third level is dangerous stuff, moving upwards, keeping your gun locked and loaded, with plenty of aliens to make Gryzor's life miserable. The fifth and final level pits poor exhausted Gryzor against the powerful alien defenses and the tough Alien central control. The Heart.

Gameplay is pretty good, firing in all directions can be rather comical because control is a little loose, but this is better than no response at all. Gryzor is very agile, shooting, jumping and crouching quickly, though turning is a little slow. Soldiers are easy to kill, larger aliens are not, the big G himself is also killed easily but has plenty of back up lives and there is an option to continue. Graphics on the horizontal and vertical scrolling screens are quite colourful and backgrounds are filled in, the characters are a little faceless though. The 3D screens are more sparsely populated but the required effect is created.

Gryzor is not a game for wimps, though I think that serious toughies may find him a bit of a matchstick man underneath his khaki Crocodile Dundee exterior. It is however a game that will entice you to see the mission through, and it does have variety of game scenarios to titillate and mutilate.

Locking and loading Gryzor isn't really a very hazardous operation, he's a nice guy who just happens to be saving the world, however widely varied game scenarios mean it's not just another beat 'em up, well nearly.