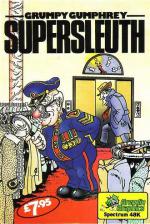 Ross: Poor ol' Grumpy Gumphrey. It's a hard life being a store defective - especially when you're getting on a bit and you reckon it's about time to take things easier. I mean, the shoplifters are getting younger and it's hard to spot them if the old eyes aren't what they used to be. On top of that the boss is out to get you, as he thinks you're a lazy old beep and he's got you running errands all over the place. So you'd better be on your toes 'cos as soon as you put a foot wrong, you're out on your ear, P45 an' all!

Your day at the store starts at 9am. Not only do you have to catch any shoplifters but when the boss says jump, you jump - and you'd better not be late with his tea. In between times, you'll have to cope with floods, fires and even an escaped gorilla monkeying about in the store.

Playing the game is pretty simple, although the controls aren't exactly responsive and the lifts between floors are prone to get stuck sometimes - I haven't sussed out if that's a feature or a gremlin.

Overall, this game's not bad but it feels as if there's something missing - not fun but perhaps addictiveness. I certainly don't think you could class it as one of the Gremlin Greats. 5/10

Dougie: For a complex 3D game, I'm amazed at how they've overcome the colour problems. Get's my vote on that alone. 7/10

Rick: So, Gremlin's taken the leap off the platforms into something altogether different. Out of the frying pan? 'Fraid so. 5/10

Overall, this game's not bad but it feels as if there's something missing - not fun but perhaps addictiveness.